Electric Picnic 2019: Everything you need to know – traffic, weather, alcohol rules and more

From traffic, how to get there, the weather to camping, here’s your go-to guide

Join us for a site tour of the 2019 Electric Picnic and check out some of the new festival features such as Freetown, Spike Island and The Cabaret. Video: Bryan O’Brien 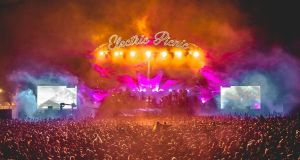 Electric Picnic 2019: at the Stradbally estate, in Co Laois, this weekend

Electric Picnic, which sold out way back in December, is Ireland’s most in-demand music festival. What began in 2004 as a boutique event, with a capacity of 10,000, will this year accommodate 57,500 people. The first of them arrive at the Stradbally estate, in Co Laois, on Thursday evening for a long weekend of music and other arts headlined by The Strokes, The 1975, Florence + the Machine and Hozier, plus must-see newer acts like Billie Eilish.

Who else is playing?

You can see the full line-up here.

When does it all start and finish?

Holders of early-entry and camper-van tickets can arrive between 4pm and midnight on Thursday. (The Salty Dog stage has music from 7.30pm.) For everybody else the gates open at 9am on Friday. Campsites close at 1pm on Monday, September 2nd.

The festival has a good half-dozen campsites, from the boutique to the basic. So you can glamp it up – you can see some of the options here – or descend to what can sometimes seem, to older festivalgoers at least, like the seventh circle of hell, with a sea of tents pitched impossibly close together. (Good luck making your way back in the dark.) You could take your lead from the groups of canny campers who pitch their tents in a circle and stick up a flag of one sort or another – the taller and more unusual the better – for easier navigation (and a better festival-campsite vibe).

If you want to cook, you should bring only disposable barbecues or a permitted cooking stove, such as a solid-fuel, firelighter or methylated-spirit stove. Leave the gas canisters (any size, including capsules), petrol burners and any form of aerosol can over 250ml at home, as they are not permitted.

Electric Picnic also has a zero-waste ethos, with Nifty Bins for you to sort your waste into, plus a take-your-tent-home policy – the organisers don’t want to have to use bulldozers again to clear away the mess some festivalgoers have left in previous years. If you have any broken tents, chairs or gazebos, dead batteries or unopened tins of food come Monday morning, you can take them to the festival’s salvage and recycling points.

Will we be fed, watered and showered?

Yes. More than 100 food stalls will be running across the main arena and campsites all weekend, catering to all appetites. (You can’t bring your own food or drink – see below for minor exceptions – into the arena.)

There will be free drinking-water points across all of the campsites and the main arena, beside the toilet blocks.

Showers will be available in the Jimi Hendrix campsite from 8am until 2pm, and again from 4pm until 7pm, on Friday, Saturday and Sunday.

Can I charge my phone?

Three will be selling 3 Power Banks in the Jimi Hendrix campsite on Friday (11.30am-6pm), Saturday (9am-6pm) and Sunday (9am-6pm) if your battery needs a top-up.

Or consider bringing a dumbphone, which is to say one of the old-fashioned, call-and-text-only mobiles you can pick up in supermarkets for not much more than €20. They last far longer on a single charge, and you won’t be left with the groan-inducing repair bill that comes with a smartphone screen that smashed when you tripped over yet another guy rope as you tried to get back to your snugly pitched tent in the dark.

What about other valuables?

Bring as few as possible. And consider renting a locker or storage box (each €28.13, including booking fee) for the weekend, in the Jimi Hendrix and Oscar Wilde campsites. The organisers recommend using them for valuables such as cash, wallets, IDs and cameras. They also point out that the boxes are “perfect for storing larger items, such as alcohol”. Because getting back to your tent to discover that somebody’s nicked your booze could be a real downer, in fairness.

Organisers stress that you need to follow Electric Picnic signage and Garda directions, not what your satnav says, once you’re close to the festival site. There are different routes depending on where you are coming from, whether you are driving yourself or being dropped off, and what kind of ticket you have.

By bus
Numerous coach companies are offering travel to and from Electric Picnic:

By train
Portlaoise has the closest station to the festival. You can check services on the Irish Rail website. Martley’s is running a shuttle bus between the station and the festival site between Thursday and Monday; no booking required.

By bicycle
If you’re arriving by bike you can use gate 1a, on the Abbeyleix road, and park in the designated area next to the Tour de Picnic bike racks.

By car
M7 westbound (from Dublin, the east and the north)
Leave the M7 at junction 16 (Ballydavis) and follow the Electric Picnic route signs along the R425 and on to the R426 to Money Cross. From here traffic will be diverted left on to the R427 to car parks A, B, C and D. Leave plenty of time for your journey, given both ongoing roadworks and speed restrictions on the M7 and the volume of traffic heading for Stradbally.

M8 northbound (from Cork and the south)
On Thursday, Saturday and Sunday, take the M8 north to junction 19, and merge with the M7 westbound. Carry on as far as junction 16 (Ballydavis) and then follow the same route as festival traffic following the M7 westbound instructions (see above). On Friday, leave the M8 at junction 3 (Manor Stone), then take the R433 through Ballacolla to Abbeyleix, where town traffic will merge left on to the N77. Traffic will then turn right on leaving Abbeyleix on to the R425. This traffic will travel northbound on the R425 and merge with traffic at Money Cross. From here it will be directed to car parks A, B, C and D.

N80 (from Carlow and the southeast)
Take the N80 westbound as far as Stradbally. Here you will be directed to the yellow car park, on the Timahoe road.

N80 (from Tullamore and the west)
Enter Portlaoise from Mountmellick on the N80. Use the Knockmay relief road on to the R445 (the Mountrath road). At Rockdale roundabout turn left on to Fr Browne Avenue. Then take the N77 (the Abbeyleix road) south to Meelick junction. Here you will merge with M7 eastbound traffic (see above).

If you have a family weekend ticket
The festival website has additional route details here.

Road closure
Only traffic heading for Electric Picnic car parks will be able to use the R427 (Cork Road, Stradbally) from Money Cross, in the south, through to its junction with the N80 at Abels Corner in Stradbally from 2pm on Thursday, August 29th, until 4pm on Monday, September 2nd.

If you’re dropping people off or picking them up
The pick-up and drop-off point is at Green car parks Z, off the N80.

Not unless you can find a resale ticket on Ticketmaster. We wouldn’t recommend buying from any other source. It’s a miserable journey home if you’re turned away after producing what turns out to be a fake.

Bring your passport, driving licence or Garda age card if you are between 18 and 25 and want to buy alcohol. You will also need ID to prove you are old enough to attend Electric Picnic: the festival does not admit anybody aged between 13 and 17, and children aged 12 or under must be accompanied by a ticket-holding adult throughout the weekend (limited to a maximum of two children per adult). Bring their passport (or a colour copy) to prove their age if they look as if they might be over 12.

You and your bag may be searched at the entrance, on the site or as you leave. Any item that could be considered usable as a weapon, or which might endanger or disrupt anybody else, will be confiscated, according to the organisers.

You can bring up to 48 cans of alcohol per person into the campsite (and up to four cans per person into the arena after 1am), as well as reusable bottles, empty plastic bottles, bottles of water and soft drinks (although you must keep them sealed, and ensure they are no more than 500ml in size, if you want to bring them into the arena before the bars close, at 1am), flags, food, small glass items such as perfume bottles (up to 100ml) and make-up mirrors, and medication (organisers recommend bringing your prescription or a doctor’s note). This is not a complete list, and it may be updated, so check the festival website too.

Friday looks set to be wet, with rain during the day and through the night. Saturday and Sunday should be better, with plenty of sunny spells, although there are likely to be showers, too. Any rain should have cleared by Monday, so your tents will at least be dry when you come to take them down. Don’t expect much in the way of heat: temperatures are likely to stay between about 14 and 17 degrees during the day, dropping to as low as 9 degrees at night.