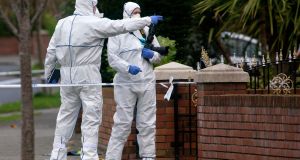 The fatal gun attack on Richard Carberry at his home in Co Meath marks a significant escalation in the Drogheda gangland feud despite extra Garda resources having been deployed to stem the violence.

A protracted series of non-fatal gun attacks, petrol bombings and beatings has now given way to more clinical and well-planned murderous gun attacks.

The feud is a drugs turf war between two criminal gangs based mainly in Drogheda, Co Louth, but with members living through Louth and Meath. It began in July 2018, when a Drogheda drug dealer was shot and left paralysed but survived his injuries.

In the months that followed, a litany of violence unfolded including arson attacks on houses and cars, beatings and at least three more gun attacks designed to kill but which left their intended targets wounded but still alive.

On one side of the feud a key figure who had been away from the Louth-Meath area for some time returned to live in the region during the summer. His return appears to have changed the dynamic of the feud.

Keith Branigan, a 29-year-old from Drogheda, was shot dead at the Aisling Caravan Park, Clogherhead, Co Louth, in late August. His was the first fatality after 13 months of feuding.

The dispute has now claimed its second victim in 39-year-old father of three Richard Carberry, who was fatally wounded outside his family home on Castlemartin Drive, Bettystown, late on Monday night.

Carberry was a leading figure in the gang that Branigan was aligned to. Their gang had gained the upper hand in the feud in the first 12 months.

However, since late summer it is the other faction – which has now shot dead Carberry and Branigan – that has gained ground.

It has now proven capable of planning and executing two gun murders with the type of brutal efficiency that eluded its rivals, who botched four gun murder attempts in the first 12 months of the feud.

Gardaí suspect the gang that has now killed Carberry and Branigan has benefitted from the experience of the senior gangland criminal who has returned to Louth-Meath in recent months to take a leadership role in that group.

He has previously been linked to three gun murders and is effectively the most senior gangland criminal on either side of the feud, who now appears to be bringing that experience to bear.

The fact that the murder of Carberry has followed just over two months after Branigan was gunned down is of real concern to the Garda.

As the Garda response to the feud has been stepped up in Drogheda, the tit-for-tat, often chaotic violence there – including petrol bombings and beatings – has all but stopped. But the violence has merely moved elsewhere – to date to Clogherhead and Bettystown – and it has proven more deadly.

The side of the feud that was under ceaseless attack in the first year of this dispute is now effectively under new management and has embarked on a campaign of murder.

Even in the context of the worst Irish gangland violence witnessed over the past two decades, the murders of two men in the same feud a little over two months apart is extreme.

The fact Carberry was targeted outside his home at a time when Garda patrols were regularly checking on it points to a worrying degree of confidence and planning on the part of those who killed him.