Killer fired up to six rounds from automatic pistol, at least two of which struck the victim 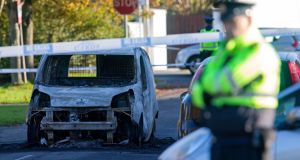 A father of three and senior gang figure shot dead outside his home in Co Meath had moved his family out of the house and installed bullet proof glass in the property after being targeted in a gun attack earlier this year.

Richard Carberry (39) died in the early hours of Tuesday morning after being ambushed by a gunman when he arrived at the family home on Castlemartin Drive, Bettystown, Co Meath, at about 11.40pm on Monday.

Garda patrols had been stepped up around his home because the risk he would be shot was so high. A patrol car had passed the property about 30 minutes before the fatal gun attack.

Carberry was regarded by gardaí as a drug dealer arranging for the supply of narcotics to one of the two gangs involved in the gun feud in Drogheda, Co Louth. And he was, effectively, one of the leaders of that gang. He had three convictions for public order offences, but none for organised crime matters despite his senior position in the Drogheda drugs gang.

His was the second killing in the feud following the shooting dead of Keith Branigan at a caravan park near Clogherhead, Co Louth, in August.

Carberry lay wounded on the pavement when gardaí and paramedics arrived just before midnight on Monday. He was treated at the scene before being taken to Our Lady of Lourdes Hospital, Drogheda, where efforts to save him failed and he was pronounced dead at about 1am.

His killer fired up to six rounds from an automatic pistol, at least two of which hit the victim.

Another of the bullets hit the victim’s car while a neighbour’s vehicle and a car parked outside a house across the street were also hit by gunfire.

“Some of those bullets could have gone through the window of a house,” said Supt Fergus Dwyer of Ashbourne Garda station. “This is a residential area; a lot of young families with young children.”

In March after his home was shot at The Irish Times understands Carberry, originally from Coolock in Dublin, moved his wife and three children – two girls are 13 and 17 and a boy aged 11 – out of the house to an address in nearby Laytown for their own safety.

He had bulletproof glass installed in his home and it had also been fitted with an extensive CCTV system, which gardaí believe captured footage of his murder.

After that Carberry moved his family back home and his wife and children were in the family home late on Monday night when he was shot outside. He had just parked his Audi SUV in the driveway and was closing the gates when the killer opened fire.

Fine Gael Cllr Sharon Tolan, who lives in Bettystown, said people in the area were shocked at the attack.

“If this individual was a known target, how was somebody able to drive into this lovely family estate, where people feel safe in their homes . . . and shoot somebody dead and drive back out?” she asked.

She added that there had been an increase in Garda resources since the feud erupted. However, these had been deployed in Drogheda rather than in east Meath.

Boy settles for €450,000 hearing loss treatment case against HSE 14:01
One in five young people have experienced abuse by partner, study finds 13:52
December sky: Jupiter and Saturn to appear closest to each other since 400 years ago 13:52
Boris Johnson confirms Santa is ‘ready and raring to go’ 13:42
Recipients of PUP to get Christmas bonus on December 8th 13:36