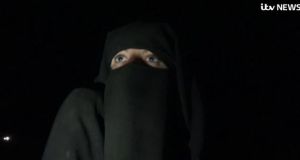 The woman with the Irish accent told ITV: “The people don’t have food. They’re struggling for food and money and everything is expensive, so I don’t know how they’re going to keep living.” Photograph: ITV

An Irish woman who is believed to be a former member of the Defence Forces has been identified in Syria as an alleged Isis member.

The Irish authorities have been aware for some time of a former member of the Defence Forces who converted to Islam while serving. She then left the organisation in about 2011 and went to Syria, apparently having been radicalised, approximately one year later.

The Irish Times understands the woman, who is now in her late 30s, first joined the Army and was based with the 27th Infantry Battalion which had a presence at the time in Dundalk, Co Louth, and Gormanstown, Co Meath.

However, she later transferred into the Air Corps and was serving in it when she converted to Islam and then left the Defence Forces.

While in the Air Corps she worked on the Government jet. On those duties she worked on flights taken by senior Irish politicians, including the then taoiseach Bertie Ahern.

Security sources said when the woman was in the Air Corps she worked at times as a driver for Major General Ralph James when he was head of the Air Corps.

In that role she would have had knowledge of security protocols and given the fact she is alleged to have spent time with Isis, she would be regarded as a security threat.

However, precisely what she has allegedly been doing with Isis and whether her presence there would lead to a criminal investigation is unclear.

However, sources in Dublin were unable to confirm last night that the woman who left the Defence Forces and later travelled to Syria was the same woman who has come to light in that country having gone there to join up with Isis. It was also not clear that the Irish woman in Syria was being detained.

Details of the Irish woman in Syria first emerged after a TV crew working for ITV News visited a camp in northern Syria about 10 days ago.

A number of Isis foreign fighters, who had travelled to Syria from around the world to fight with the group, were living in the camp after they had effectively been defeated on the battlefield.

When the TV crew interviewed some of those alleged to be foreign fighters and their wives and children, one woman spoke with an Irish accent.

Security sources in Dublin have said the Garda and Defence Forces have been in touch with the family in Co Louth of the woman who was in the Defence Forces and who converted to Islam and went to Syria.

There had been ongoing contact with that family, though the woman’s whereabouts in Syria has been unknown for years.

Gardaí and the Department of Foreign affairs have in recent days been in contact with the woman’s family to establish if the person in the ITV report is her. And based on those checks, gardaí and the Irish government believe it is the same person.

However, the same sources also said no foreign government or military or police force had contacted the Irish authorities about the Irish woman in Syria.

And because of that, that woman’s identity has not been independently confirmed as the woman who was in the Defence Forces. Without information from a foreign government or security agency, the Irish authorities have, as yet, also been unable to confirm that she has been detained.

When she appeared in the news report, she appeared to be among a group of people gathered at displaced persons rather than being in custody or some form of detention.

However, because the security situation was so chaotic and agencies were so overwhelmed in Syria, accurate information that independently confirms the identity of the Irish woman there and her status may take some time.

The woman with the Irish accent told ITV: “The people don’t have food. They’re struggling for food and money and everything is expensive, so I don’t know how they’re going to keep living.”

When asked how the people left behind in Baghuz were doing, she said. “They’re tired. morale is low, I suppose. It’s like a rollercoaster for the people. Some want to leave, some don’t want to leave.”

“Some are tired, some are not tired,” she said. “You come, you see the propaganda . . . you want Islam, you want to come and live in a Muslim country . . . a Muslim environment, Muslim music, no smoking, no drinking, no prostitution . . . anything like this. You want clean life like this but sometimes it is not like this,” she said.

The camp she was in has been described by sources in Dublin as being both for people displaced as a result of the conflict and for foreign fighters and their families who were effectively under some form of detention there.

The Garda has been aware for some time of the former member of the Defence Forces who is believed to have joined up with Isis.

And while security sources said the woman who has been interviewed in Syria appears to be the same woman who left the Defence Forces in 2011, checks were still being made to confirm this.

A number of sources stressed it may take some time for details to become clearer, though Irish officials were seeking briefings from international agencies, including US authorities.

While the woman was in the camp in northern Syria up until at least one week ago, there are some reports she had since been taken into the care or custody of the Americans in Syria.

The same sources said they believed the Irish woman had a young child of the age that would suggest she gave birth while in Syria.

A spokesman for the Department of Foreign Affairs said the Government was aware of reports of an Irish citizen being detained.

“Where possible we will provide consular assistance but we do not comment on individual cases,” said a spokesman for the Government.

A senior source said that the woman had not yet made contact with the Government, and it could not offer consular assistance until she did so.

“Until we get a request for her for assistance, there is little we can do,” the source added.

A spokesman for the Minister for Justice Charlie Flanagan said the minister is aware of the reports. “However, it would not be appropriate to comment on the detail of security matters, or indeed on individual cases,” he said.

The case comes after Taoiseach Leo Varadkar’s recent statement that taking citizenship away from people caught up with groups like Isis was bad practice and was something the Government would be “loath” to do.