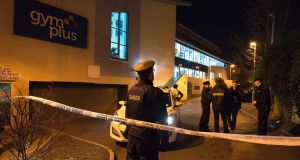 A 23-year-old man from Swords has been killed in what is suspected to be a gangland attack.

A second man has been seriously injured in the shooting outside a gym in Swords, north Co Dublin.

The shooting took place at 7:30pm on Thursday evening outside Gym Plus Swords, which is located in the small Applewood estate of the north Co Dublin town.

The gym is located near a residential area, across the road from a row of houses, and opposite a crèche.

Shortly after the shooting occurred an announcement was made over the gym intercom requesting anyone present who was a trained doctor or nurse to urgently come to the reception area, according an individual inside at the time.

Gardaí and emergency services attended the scene. Police helicopters could also be seen in the area shortly after the shooting took place. An ambulance and a fire brigade unit left the area at about 8:30pm, although the body remained in place at a side car park.

In a statement, gardaí said they were investigating the fatal shooting.

“A number of shots were discharged and two men were injured, one man (early 20s) was fatally injured. The second man (mid 20s) was removed to Beaumont Hospital and his condition is described as serious.”

Gardaí said the body of the deceased remains at the scene and investigations are ongoing.

A number of distraught people arrived at the scene shortly after the shooting, according to several eye witnesses, visibly upset and claiming to know at least one of the victims.

Reacting to news of the shooting, local Labour Party councillor Duncan Smith said the scene outside the gym was one of “total shock”. A large number of people had gathered near the closed off crime scene, he said.

“People are shocked, there are hands on heads, and open mouths, its eerily silent,” he said.

“I know it’s always said, but you just don’t expect it to happen here, this is a young, vibrant area.”

The scene was cordoned off and sizeable crowds gathered around a large Garda presence.

Martin White, who lives in a nearby apartment, said he heard four shots.

“I heard shots going off and I knew they weren’t fire works. It’s very sad,” he said, standing at the railings of his home with a friend.

“I was standing at the door and there was nothing out of the ordinary going on. . . I didn’t hear any car speeding away or anything.

“The fire brigade arrived first, then an ambulance and then a lot of Garda cars.

“They were here very fast and I knew it was something serious when I seen the amount of Garda cars arriving.”

Another man commented that the gym was opposite a crèche where parents would have been collecting children up until about 7pm.

“There is no value on life anymore,” said a nearby resident who asked only to be identified as Mick.

“This is a shock now; this is the first I have heard of [something like] this and I have been living around here for a while.”

Locals said one of the victims lived close by but this was not confirmed. The Garda helicopter had arrived quickly after the shooting, they said.

The Applewood area is about 17 years old and is made up of a warren of roads and homes. Locals said it was made up mainly of young families and was home to a large Eastern European community.