How to target juvenile crime gangs? Hit them in the middle management

Half of youth crime carried out by 3 per cent of offenders, according to new research 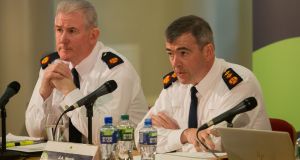 Assistant Commissioner of the Dublin Metropolitan Region Pat Leahy and Garda Commissioner Drew Harris. Youth crime is a major problem in Ireland, with roughly one in every 10 offences committed by children. Photograph: Gareth Chaney Collins

At first glance the infamous “French Connection” drug trafficking ring of the 1970s appears to have little to teach us about how to handle juvenile delinquency in Irish towns.

Although youth crime continues to be a major problem in Ireland – roughly one in every 10 offences are committed by children – it is still significantly less serious than the international smuggling operation which at one time was responsible for most of America’s heroin.

On further inspection the two subjects share an important similarity. The French Connection ring relied heavily on a small team of specialists, known as “courier recruiters”, who were based in airports and responsible for convincing or coercing ordinary passengers to smuggle drugs for them.

When the authorities realised the whole criminal network was based on these specialists, they targeted them specifically and aggressively, eventually causing the collapse of the entire operation.

According to Prof Sean Redmond, a data analyst with the Department of Children, the same approach can be applied to the small-time criminal gangs that operate across Ireland and are responsible for many of the burglaries, robberies and drug offences that plague communities.

In 2017 Redmond, while on secondment to the University of Limerick, published a ground-breaking piece of research showing how much these gangs rely on children to commit offences and the disastrous impact they have on those children’s lives.

Redmond picked a Garda subdivision outside Dublin which had a high level of burglaries (five times the national average). He tasked gardaí with analysing the arrest data in the area so links could be drawn between offenders.

The end result was a network map of the relationships between offenders. Using this map, he interviewed local gardaí about these relationships which gave him a detailed picture of the main criminal gang operating in the area, its structure and its hierarchy.

He named the area “Greentown” to preserve the anonymity of the community and the offenders, most of whom were children.

The research found that a small gang of offenders was responsible for a huge proportion of the burglary and drug crime in the area. It also found this gang relied heavily on recruiting children to carry out the offences and insulate the senior members.

The next job was to determine if Greentown was an anomaly. Two subsequent studies in other high-crime areas, Redtown and Bluetown, showed definitively it was not.

When these studies and associated research are published later this year they will show there are roughly 1,000 serious and persistent child offenders in Ireland, most of them under the influence of gangs.

The key to tackling this problem is to target specific, crucial personnel in the gang structure, people who can’t be easily replaced, similar to what the French and American police did in the 1970s. There are three approaches to this, says Redmond.

The first and most obvious is to cut off the head of the snake – target and aggressively prosecute the gang leadership. Redmond believes this would work well in a gang with a business-like structure. However “most of these gangs are based on family and kinship, which are much more sustainable. So in my personal view, that would be much less effective,” he says.

The second strategy is to go after the foot soldiers, the children who are committing the majority of the crimes. Target them and their families with increased support, care and diversion.

“The problem that we have with that,” says Redmond, “is these kids are seen as pretty disposable and so replaceable, so I’m not sure that would work.”

The third and final option is to go after the “courier-recruiters”, the mid-ranking gang members, usually in their late teens or early 20s, who are responsible for recruiting the children. Taking these people out of the equation severely hampers the gang’s ability to grow or even replace the children who leave.

“My gut is they are probably the biggest vulnerability point within networks.” Redmond is quick to add that the response must not just be enforcement but also community development and support for those who want to exit gangs.

The Greentown gang is mainly involved in low- to mid-level crime such as drugs and burglary, yet it shows a surprising level of sophistication – it’s like a cross between The Sopranos and Fagin’s gang in Oliver Twist.

There are internal rules, such as not needlessly antagonising gardaí, and sanctions for breaking those rules (usually a beating). There is a senior figure, a 29-year-old man known as A2, who insulates himself from the offending by giving orders through carefully selected lieutenants.

There is an established recruitment and grooming process for young members and systems to keep them under control through the use of intimidation or debts.

For Redmond, the primary targets for gardaí shouldn’t necessarily be A2 or his family. Rather they should be those in the outer kinship circle. People such as Z1 (male, 28), “an intriguing character, originating from outside Greentown”.

Z1 is considered the second-in-command and a confidant to A2. He also has links to other gangs which he uses to fence goods and buy drugs.

D1 (male, 20) is another step below. “D1 has a reputation for driving proficiency but is not considered to have the right temperament or intelligence to become leader of the network,” Redmond writes.

However D1 is also a “controller and recruiter of new participants” making him crucial to the gang’s success and not easily replaced.

Redmond’s research was not written to gather dust on a shelf. Garda management has tasked him and his team with devising concrete proposals on how to disrupt these gangs and prevent children from getting caught up in them.

Despite its failings, Redmond is slow to criticise the Irish youth justice system, pointing to the fact Ireland has a lower rate of both child detention and juvenile offending than the UK. However, he concedes the system for dealing with serious and persistent offenders is in need of reform.

“These are really, really complicated situations and we have been quite rigid in dealing with them. We just need to be a bit cuter.”