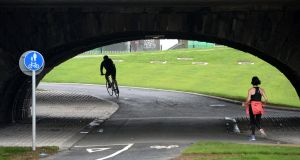 The cycle path along the Royal Canal, in North Strand, Dublin. Photograph: The Irish Times

Safety concerns have emerged over the new €9 million Royal Canal cycle path in Dublin’s north inner city after cyclists and local residents reported intimidating and threatening behaviour along the route.

The recently opened 750m path runs from an existing path linking the Liffey quays to Sheriff Street, to Newcomen bridge at the North Strand. Work will begin next year to extend the path along the canal to Ashtown.

John McElligot, who lives near the docklands end of the route, said he wrote to Dublin City Council and contacted gardaí after he felt compelled to abandon the new path and return to the road following an incident.

“I was delighted with the new path, it’s a great way to avoid the awkward junction at the Five Lamps. But on Sunday there was a group of teenage boys, on foot, spread right across the path, who weren’t giving way, and I thought, ‘do I want to run the gauntlet of this?’ ”

Mr McElligot (73) said a friend had a similar experience the day after the path opened, when a group of teenagers, this time on bikes, were aggressive and would not let him pass.

“I did have that in my head as I left the path. Then I ended up in the thick of traffic, and one feels like such a loser. This is a wonderful piece of infrastructure and it would be such a shame if this sort of behaviour took hold and we were denied its use.”

Kieran Ryan of the Dublin Cycling Campaign said it was important such problems were addressed quickly so they do not take hold and escalate, potentially jeopardising the development of the rest of the canal greenway.

Part of the difficulty was in the design of the new section, said Mr Ryan.

“A lot of residents in adjoining streets backing on to the greenway decided they would prefer if there weren’t gaps in the wall. That means there is a vulnerability that if there is anti-social behaviour, you are in an enclosed space, with nowhere to exit.

“The only immediate solution is regular Garda patrols to deter people from claiming it as their space.”

Mark Fay, of the Northwall Community Association, said the design of the new path was also causing problems for local residents.

“Since it opened we’ve had quad bikes and scramblers tearing in and out of it and horses using it,” he said.

Mr Fay said that while fencing has been installed at the backs of some houses, most have been left “completely exposed”. Even where fencing was present it was inadequate. Gardaí had been informed of an incident where teenagers had climbed into a back garden of one house and confronted the homeowner, said Mr Fay.

“Some of the electrical power boxes feeding the street lights are positioned right up against the unprotected back walls making it easy for anyone to access these houses.”

Mr Fay agreed that a policing plan should be put in place so people are not dissuaded from using the new path. “If people start avoiding it other elements will take over.”

The council has installed CCTV along the route that “directly feeds to An Garda Síochána offices”, it said. “Furthermore, Dublin City Council is engaging with the residents through the central area office and the community liaison garda assigned to ensure that all anti-social issues reported are dealt with.”

A Garda spokeswoman said officers were conducting regular patrols of the area.