Two men due for court over €3m heroin seizure 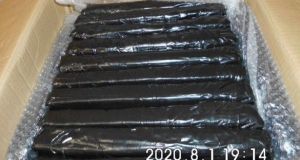 Part of the consignment of heroin seized in Dublin on Wednesday. Photograph: Revenue’s Customs Service

Two men have been charged in connection with the seizure of €3 million worth of suspected heroin in Dublin on Wednesday.

The suspects were arrested following a joint operation between the Garda National Drugs and Organised Crime Bureau (GNDOCB) and Revenue’s Custom Service led to the multimillion euro narcotics seizure.

They are due to appear in court on Saturday morning.

Gardaí believe the drugs had recently entered the country. The haul was monitored, leading to the arrest of the two suspects – aged 40s and 30s – in the Dublin 15 area.

The arrested men were questioned in Blanchardstown Garda station under section 2 of the Criminal Justice (Drug Trafficking) Act after their arrest.

Det Chief Supt Angela Willis, head of GNDOCB, said the operation had “resulted in the seizure of a significant quantity of heroin from circulation within communities that are suffering the consequences of drug trafficking”.