Six of 76 complaints made by Irish prison inmates upheld

Largest number of complaints (21) filed against officers at Midlands Prison 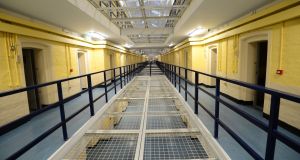 Just six of the 76 complaints made by prisoners against staff in Irish jails last year have been upheld to date.

Minister for Justice Charlie Flanagan said 52 complaints were not upheld, eight were terminated and 10 of the cases are ongoing.

The largest number of complaints (21) were filed against workers at the Midlands Prison.

Inmates at Castlerea in Roscommon made 15 complaints, while there were 11 from Wheatfield, seven from Mountjoy and six from Cloverhill in Dublin, and six from Portlaoise Prison.

Prisoners in Cork made four complaints while there were three at Limerick, two at Dóchas women’s prison in Dublin and one at Arbour Hill.

Responding to the figures, provided in response to a parliamentary question from Sinn Féin TD Jonathan O’Brien, deputy general secretary of the Prison Officers’ Association Jim Mitchell said the vast majority of complaints against prison staff “are vexatious”.

He said the six complaints upheld were “of a minor and trivial nature”.

Vexatious complaints were made to cause disruption to the operation of prisons “and to undermine the character of prison staff who are going about their jobs and carrying out their work to the best of their ability”, he added.

In Irish prisons, a Category A complaint alleges “assault or use of excessive force against a prisoner, or ill-treatment, racial abuse, discrimination, intimidation, threats or any other conduct against a prisoner of a nature and gravity to bring discredit on the Irish Prison Service”.

The figures show that 5 per cent of such complaints from prisoners in the four years between 2012 and 2015 were upheld.

Of the 318 complaints received in that period, 18 were upheld, 247 were not upheld, 30 were incomplete, 22 were terminated and one was not proven.

Of these, 164 related to assault, 62 to race issues, 42 to mistreatment, 26 to issues under the heading “Sexual”, and 24 to alleged threats and intimidation.