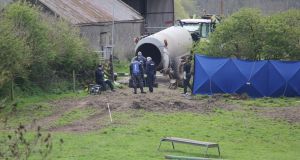 Garda forensics and a diver at work near a slurry tank Bobby Ryan’s body was discovered at the back of farm in Fawnagown outside Tipperary town. Photograph: Press 22

Of all the twists and turns in the murder trial of Tipperary farmer Patrick Quirke, the revelation that gardaí searching for his victim’s body acted on a tip-off from a water diviner was probably the most bizarre.

At the beginning of April, as the marathon trial entered its ninth week, exhibits officer Garda Kieran Keane agreed with the defence that sometime after Bobby Ryan went missing, gardaí sent the Garda Water Unit to Ardmore, Co Waterford, after a water diviner said the victim’s body would be found there.

He said his understanding was that the diviner uses “psychic powers” along with two rods held over a map to locate certain things.

Not much more was said about the matter or why gardaí were suddenly following leads generated by clairvoyants in their efforts to find Ryan, who was first reported missing in 2011.

According to sources close to the investigation, the search took a somewhat supernatural turn when some of the missing man’s family consulted a man who advertised his services as a water diviner or dowser.

This individual held two brass rods over a map of Ireland and said the movement of the rods indicated Ryan’s remains were located just off the coast of Waterford.

Family members, desperate for any help in their search, went to Tipperary Garda station and presented the map to investigators.

Detectives listened to the family and added Ardmore to the ever-growing list of places Ryan might be located. Since publicly announcing Ryan’s disappearance in June 2013, investigators had received a many tip-offs, some more far fetched than others.

One person said they had seen him DJing in Portugal. Another said he was “in the water in Barcelona”. Still another said he had a picture of himself on holiday with Ryan’s arm around his shoulder.

The strangest was a man who told gardaí to follow certain lines on a map, that Ryan would be at the intersection of those lines.

Alongside these were other more plausible leads, all of which had to be chased down.

Investigators were not planning on spending much time chasing down the water diviner lead. However, they also had to be seen to be thorough. The water unit was dispatched to Ardmore but it is unclear if divers entered the water or not. Either way, the lead ended there.

Ryan’s body would be found in 2013 hidden in a slurry tank.

Gardaí and the prosecution team were taken by surprise when the matter was raised during the trial. The defence had noted the mention of the diviner on notes made by one of the senior investigators. Gardaí believe the defence raised it to try discredit or embarrass the investigation. They were very anxious that it be made clear that investigating officers did not consult, or otherwise seek, the help of someone claiming to have psychic powers.

When it came time for the prosecution to question Garda Keane, he told the court he did not believe gardaí had engaged the water diviner personally: “I don’t believe we chased anyone down.”

However, he agreed they had come into possession of the information.

Strangely, if gardaí had actually consulted a psychic, it would not have been the first time.

There is a long history of the Garda and other police forces turning to clairvoyants when all other avenues of investigation have been exhausted. Perhaps the most famous example is the investigation into the theft of prized racehorse Shergar in Kildare in 1983.

The lead investigator, chief superintendent James “Spud” Murphy, told reporters that the number of “clairvoyants, diviners and psychic persons” working on the case was at least 50. (Although it must be said that chief supt Murphy was a highly experienced detective who liked to have a bit of fun with the press).

UK psychic Dennis McKenzie famously claimed to have provided police with the breakthrough in the murder of schoolgirls Holly Wells and Jessica Chapman in Soham, Cambridgeshire, in 2002.

In 2007 he came to Ireland where he advised the family of missing teenager Richard “Happy” Kelly that his remains were located somewhere along the Dublin Road in Limerick.

Insp Gerry McNamara, of Roxboro Road Garda station, said gardaí would follow up the lead. But when Kelly’s body was eventually found a month later it was by chance. His remains had become snagged in a fisherman’s net in Lough Brigid in Co Clare.

Earlier this week,it emerged a police sergeant in the Scilly Isles has been disciplined for, among other things, suggesting to the family of a missing man that a water diviner be used in the search.

It’s not just police forces which sometime turn to the supernatural. In 2017 it was revealed that 10 out of the 12 water companies operating in the UK still used water diviners to find pipes or leaks, prompting calls for the regulator to step in and stop customers being billed for such practices.