Marie Anderson due to take over PSNI watchdog role in July 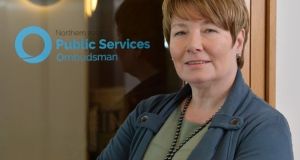 On Friday Northern Secretary Karen Bradley announced that in the absence of a Stormont powersharing administration, which normally would have responsibility for the appointment, she is recommending Ms Anderson for the key post.

“My absolute priority is to see the restoration of the Executive at the earliest opportunity,” said Ms Bradley. “In the interim my responsibility is to ensure good governance and stable public services in the best interests of the people of Northern Ireland. “

The outgoing Police Ombudsman, Dr Michael Maguire will stand down in July. He was appointed in 2012.

Ms Anderson, who will be on annual salary of £134,841, will command a staff of 150 dealing with complaints against the PSNI. The appointment is for seven years.

Ms Anderson, who will stand down as Public Services Ombudsman when she takes on her new job, also holds two other statutory offices — Northern Ireland Local Government Commissioner for Standards and Northern Ireland Judicial Appointments Ombudsman.

She has previously held a number of other high profile public service positions including the Deputy Northern Ireland Ombudsman and the Assistant Information Commissioner for Northern Ireland.

Ms Anderson is a graduate of Queen’s University, Belfast and qualified as a solicitor in 1985. She worked in private practice for several years mainly in the area of civil litigation.

The PSNI chief constable George Hamilton welcoming the announcement said Ms Anderson would bring a “wealth of experience” to the position.

“I recognise the importance of the role of the office of the Police Ombudsman for Northern Ireland and the public confidence that the independent investigation of complaints against police carried out by the office can bring,” he said. “It is an essential part of the mechanisms by which the PSNI can be held to account and I am confident PSNI will engage positively with the new Police Ombudsman in the future,” added Mr Hamilton.