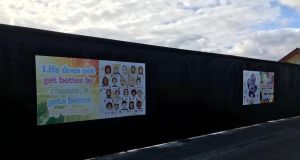 Community artwork in the Creggan area of Derry

A dissident republican mural threatening “informers” that had appeared in the Creggan area of Derry has been replaced with community artwork.

Signs and graffiti threatening anyone who gave information to the police went up on Wednesday night near the scene of the fatal shooting of journalist Lyra McKee.

Ms McKee was shot during rioting in Creggan two weeks ago and died shortly afterward. The police believe dissident republican group the New IRA was responsible.

In the aftermath of her murder, a large mural on Central Drive was altered to read “IRA: Defeated Army”. On Wednesday this was replaced with “New IRA aren’t done. Undefeated Army” and “IRA Unfinished Revolution”.

The graffiti threats, on the walls of a community centre in Central Drive, read: “IRA here to stay” and “Informers WILL be executed”.

Two placards shaped like road signs had also been attached to lampposts.

One read: “RUC Informers: They will forget about you, we won’t. IRA.”

The other carried a picture of a rat with a target over it, and the words “Informers will be shot. IRA.”

On Friday the graffiti was removed following negotiations between dissident republican political party Saoradh and community workers in Creggan.

The mural was replaced with community artwork bearing positive messages, including “our differences make us stronger” and “life does not get better by chance, it gets better by change”.

A spokesman for Creggan Neighbourhood Partnership said it was the result of “a process of inclusive dialogue, which involved Saoradh and community leaders from throughout the Creggan area.

“They are all seeking to create the opportunity for calm to allow the community to come to terms with recent events and restore community harmony at this time.

“The artwork was done in conjunction with young people with the aim of promoting respect, inclusion and social justice,” the spokesman said.

The Police Service of Northern Ireland (PSNI) in Derry have made repeated appeals for witnesses to come forward in connection with the murder of Ms McKee.

More than 140 people have come forward with images, footage and other details, and the PSNI said it will request the “maximum protection” for witnesses, which could include anonymity and giving evidence by video link, from behind screens and with voice distortion.