Criminal gangs in Drogheda once worked together – Chief Supt Mangan 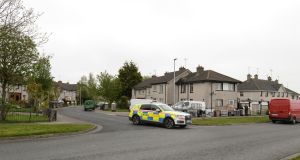 Garda presence: Garda Chief Superintendent in Louth says gardaí are prepared to talk to both gangs to find some sort of resolution. Photograph: Dara Mac Dónaill

The Garda Chief Superintendent in Louth has said the two criminal gangs involved in recent feuding in Drogheda once worked together but have now “imploded”.

Supt Christy Mangan also said the “unprecedented” additional Garda resources allocated to Drogheda were necessary as the violence was unprecedented.

Earlier in the week, it was confirmed that 25 additional gardaí would be allocated to the town, in addition to the armed Emergency Response Unit already being deployed there.

Supt Mangan, who was speaking on Friday following a meeting with Minister for Justice Charlie Flanagan and Garda Commissioner Drew Harris in Drogheda Garda station on Thursday night, said the two gangs were led by a small cohort.

“There are a considerable number of people behind them to carry out their violent acts on their behalf,” he told LMFM radio, estimating each side has support of 30-40 others.

“It has to be understood that both of these groups worked together for a considerable period of time and they were quite happy to continue on until one group started to attack and intimidate the other group.”

He said efforts to resolve the dispute had failed so far but gardaí were prepared to talk to both sides and try to find some sort of resolution.

“What I would say to them that while they endeavour to inflict maximum damage on themselves, we will be arresting them, we certainly will be charging them. We will be bringing them before the courts and, depending on the sentence, a number of them will end up in jail.”

He also said the Fleadh Cheoil na hÉireann, which would take place in Drogheda in August, would be safe. “I will be providing a service second to none for the fleadh to make sure everybody is safe.”

1 Covid-19: Public urged to ‘stay at home’ as 1,025 further cases confirmed in State
2 Transmission of Covid-19 on flight into Ireland linked to 59 infections
3 Man (21) charged with breaking into a house armed with an axe
4 US election: ‘Donald Trump needs to go. White America got what they want’
5 Maureen Dowd: Biden the anti-venom for Trump’s poisonous menace
Real news has value SUBSCRIBE