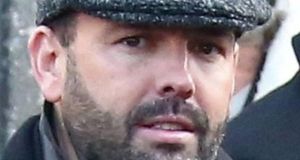 In a press conference on Monday focusing on the Garda’s success against the Kinahan crime group, Assistant Commissioner John O’Driscoll said the Bureau is intent on dismantling the gang which is estimated to be worth around €1 billion.

Without mentioning Daniel Kinahan by name in line with standard Garda policy, Mr O’Driscoll said he was confident the Garda will have success in bringing the very top of the gang’s hierarchy to justice.

Garda sources later confirmed his statements were referring to Kinahan who currently lives in the United Arab Emirates (UAE) and has been making efforts recently to establish himself as a legitimate figure in professional boxing.

Kinahan has been identified by an Irish High Court judge as controlling a vast international network of drugs and arms smuggling.

The Assistant Commissioner’s comments are strongest signal yet that the Garda believes it has enough evidence to mount a case against Kinahan and refer a file to the Director of Public Prosecutions (DPP).

It is understood gardaí believe their strongest chance of success in prosecuting Kinahan is linking him to the conspiracy to murder rival James Gately.

There is also evidence linking him to the foiled plot to murder Patrick “Patsy” Hutch in Dublin’s north inner city in 2018.

One of the main barriers to Kinahan’s prosecution is his location in Dubai. Ireland has no extradition treaty with the UAE and it is believed Kinahan has not set foot in the EU in several years.

On Monday, Mr O’Driscoll said gardaí had sent representatives to several countries, including the Middle-East, as part of ongoing organised crime investigations, although he declined to be more specific.

“While I might not mention any names in particular until such time as criminal charges are brought, if we gather such evidence as to prefer criminal charges, clearly the hierarchy of people in these crime groups are being targeted,” Mr O’Driscoll said. “It is ultimately our aim to dismantle the entire crime group.”

He said he is “satisfied” the Garda has gathered “sufficient evidence to ensure that there will be other charges,” adding that any decision will ultimately be a matter for the DPP.

The Garda briefing came just a few hours after a judge handed down a total of 19 years to three associates of the Kinahan gang for plotting to kill Patsy Hutch. A total of nine people have now been convicted in relation to the plot following an intensive garda investigation hinging on surveillance of the gang.

The Kinahan Cartel is a cynical criminal organisation that preys upon “desperate and foolish” individuals in the recruitment of “dispensable foot-soldiers”, sentencing judge Mr Justice Tony Hunt said.

At around the same time as the sentencing at the Special Criminal Court, it was claimed that Daniel Kinahan would be stepping back from the world of boxing to “focus on other interests.”

The statement was made by Bob Yalen, the president of MTK, a boxing management company Kinahan co-founded in 2012.

“Daniel’s going to be taking time away from the sport to focus on other interests and hopefully this will put a stop to the negative press from Ireland that’s based entirely on hearsay,” Yalen said in an interview with sports website The Athletic.

“And it’s unfortunate for his fighters that he’s taking this step back. But I respect his personal decision.

“He wants to do what’s right for the sport, he loves the fighters.”

Kinahan co-founded MTK, which was then known as MGM, with his then business-partner Matthew Macklin in Marbella, Spain in 2012.

MTK said it cut ties with Kinahan in 2016, shortly after he was targeted in the Dublin Regency Hotel shooting which left his friend David Byrne dead.

However, Kinahan has maintained close ties to the management company since and advises many of its fighters, including Fury, Billy Joe Saunders and Darren Till.

The news comes after it was announced last week that Kinahan will play no further role in negotiating a two-fight deal between heavyweight champion Tyson Fury, who Kinahan advises, and rival Anthony Joshua.

In another blow, Kinahan was also recently dropped as an adviser to KHK, a sports company owned by a Bahraini prince.

The moves were announced following a backlash after Fury’s announcement that Kinahan was instrumental in negotiating his two fight deal with Joshua, which is viewed as one of the most anticipated bouts in modern boxing history.