Daniel Kinahan ‘stepping back from boxing’, his management company says 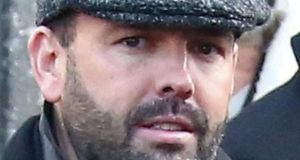 The news of Daniel Kinahan’s involvement in the Fury-Joshua fight was met with anger by Irish politiciansFile photograph: Collins

Drugs smuggler Daniel Kinahan is to step back from boxing “to focus on other interests”, the president of the management company he co-founded has said.

The news comes after it was announced last week that Kinahan will play no further role in negotiating a two-fight deal between heavyweight champion Tyson Fury, who Kinahan advises, and rival Anthony Joshua.

Kinahan, who according to the Irish High Court, controls a vast international drug and arms smuggling network, was also recently dropped as an adviser to KHK, a sports company owned by a Bahrani prince.

The moves were announced following a backlash after Fury’s announcement that Kinahan was instrumental in negotiating the two fight deal with Joshua, which is viewed as one of the most anticipated bouts in modern boxing history.

MTK President Bob Yalen said, in comments to the sports news website The Athletic, that the Dublin man, who has no previous convictions, is stepping away from the sport.

“Daniel’s going to be taking time away from the sport to focus on other interests and hopefully this will put a stop to the negative press from Ireland that’s based entirely on hearsay,” he said.

“And it’s unfortunate for his fighters that he’s taking this step back. But I respect his personal decision.

“He wants to do what’s right for the sport, he loves the fighters.”

Kinahan co-founded MTK, which was then known as MGM, with his then business-partner Matthew Macklin in Marbella, Spain in 2012.

MTK said it cut ties with Kinahan in 2016, shortly after he was targeted in the Dublin Regency Hotel shooting which left his friend David Byrne dead.

However, Kinahan has maintained close ties to the management company since and advises many of its fighters, including Fury, Billy Joe Saunders and Darren Till.

The news of Kinahan’s involvement in the Fury-Joshua fight was met with anger by Irish politicians, including Fine Gael TD Neale Richmond. Mr Richmond welcomed the latest development on Monday but expressed some scepticism about Kinahan’s future intentions.

“These reports, if true, are extremely welcome. Daniel Kinahan should have no role in boxing at any level and those involved with the sport should be fully aware of exactly who he is based on years of misery heaped on the streets of Dublin.

“Unfortunately, it is hard not to be cynical and we must see absolute clarity that he is in no way involved, directly or indirectly.”