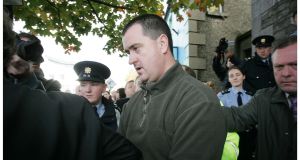 Joe O’Reilly was convicted of murder and sentenced to life in prison in 2007. Photograph: Alan Betson/The Irish Times

Joe O’Reilly is to seek permission from the Supreme Court to appeal an unsuccessful attempt to have his conviction declared a miscarriage of justice.

In July 2007, O’Reilly was found guilty by a Central Criminal Court jury and sentenced to life imprisonment for the murder of his wife at their home in the Naul, Co. Dublin.

Rachel O’Reilly’s badly beaten body was found in the bedroom of her home by her mother on October 4th 2004 and in the intervening period Joe had appeared as a guest on the topic of her death on The Late Late Show.

O’Reilly had lost an appeal against his conviction and last year an application to have his conviction declared a miscarriage of justice was dismissed as an “abuse of process” by the Court of Appeal.

His lawyers returned to the Court of Appeal on Friday morning to seek legal aid for a Supreme Court action.

Barrister Ronan Munro BL, for O’Reilly, applied for legal aid to pursue an application to the Supreme Court for leave to appeal the Court of Appeal’s dismissal of his earlier miscarriage of justice application.

However, Mr Justice George Birmingham, who oversees the procedural management of cases through the court on his own, said three judges would have to convene to deal with the matter.

Mr Munro attempted to advocate against the court’s view that the same three judges had to decide on a legal aid application. However, Mr Justice Birmingham said “it would be different if this was routine, but it isn’t”.

“It seems you’ll have to advance significant reasons” for legal aid for a future appeal, the judge said. There wasn’t an automatic right of appeal to the Supreme Court, as there had been before the Court of Appeal was established, he said.

“You’re effectively saying you feel you’re entitled to knock on the door of the Supreme Court. Maybe you are,” the judge told Mr Munro but legal aid would be another matter, he said.

“If he wants to go to the Supreme Court, he’ll have to file good reasons,” the judge said as he listed the matter for July 23rd.

Speaking on behalf of the Court of Appeal last May, Mr Justice Birmingham said it was an “unacceptable strategy” to raise the arguments O’Reilly had raised at this point.

O’Reilly’s application was based on events that occurred on the third day of his Central Criminal Court trial when a portion of the book of evidence was found in the jury room, the judge said.

It was clear, from the way in which the issue was approached by the trial judge and counsel at the time, that O’Reilly was fully informed and fully engaged with what was happening then, he said.

As a result, O’Reilly’s application under section 2 of the Criminal Procedure Act did not proceed to full hearing.

Counsel for the Director of Public Prosecutions, Brendan Grehan SC, had asked the Court of Appeal to dismiss O’Reilly’s application as an “abuse of process” because it was not based on any new or newly discovered facts as required under the Act.

On day four of O’Reilly’s trial for murder the court registrar was advised that a portion of the book of evidence had been left in the jury room.

Trial judge Mr Justice Barry White had made it clear, Mr Grehan said, that he would discharge the jury if any of them had read any portion of the book of evidence, otherwise the trial would continue.

The foreman of the jury was then asked whether any juror had read any portion of the book of evidence and his reply was: “not to my knowledge, no”.

Mr Grehan said that exchange took place with 11 jurors, the trial judge, Mr O’Reilly and all counsel present in court. The suggestion that one of the jurors simply sat there and stayed dumb did not arise because the “eyes of everybody in court” would have been looking at their reactions.

Mr Grehan said O’Reilly met with his legal team before the court sat, he was informed of what had transpired and informed that if any of the jurors had read any part of the book of evidence the jury would be discharged.

Not only was no application made to discharge the jury but those were O’Reilly’s instructions to his legal team — that if nobody had read any portion of the book of evidence the trial could proceed, Mr Grehan said.

It was “impossible to contemplate how the significance could not have been appreciated” by O’Reilly at the time and his case was “simply unstateable” and “bound to fail,” Mr Grehan said.

Counsel said the “very experienced” Mr Justice White had rigorously assessed the evidence in the trial and O’Reilly had enjoyed favourable rulings up until that point. Mr Justice White had also ruled inadmissible O’Reilly’s appearance on the Late Late Show, Mr Grehan said.

There should be finality to criminal trials, Mr Grehan said, not just for the Director or the accused but for victims and their families also.

Counsel for O’Reilly, Patrick McGrath SC, said the jurisdiction to dismiss miscarriage of justice applications “ought to be used sparingly”.

Mr McGrath said this was an exceptional case – a prohibitive document had somehow found its way into a jury room and the inquiry of the jury was inadequate.

He said the DPP was seeking to close O’Reilly out of having his application determined at full hearing.

He said O’Reilly had not applied to discharge the jury because he was advised not to.

His legal team had advised him not to lose “this judge” or “this jury” because “we’re down to 11 (jurors), some rulings have gone in your favour, it’s likely some more rulings will go in your favour”, Mr McGrath said.

Counsel said O’Reilly should be allowed to have his full application heard on all squares and the court should not “cut him off at the pass”.

O’Reilly lost an appeal against conviction in 2009 while in August 2012 he failed in a subsequent attempt to have his conviction quashed after arguing his detention in the Midlands Prison was unlawful.

In November 2012 O’Reilly was granted legal aid in his bid to have his conviction declared a miscarriage of justice.

Section 2 of the Criminal Procedure Act 1993 states that a person who remains convicted after appeal may apply to the court to have their convictions quashed based on alleged new of newly discovered facts that show a miscarriage of justice occurred.