They ‘just nod off’: Heartbreak of narcolepsy laid bare in court 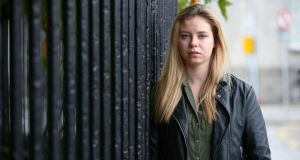 It is not unusual to see people nodding off during long, complex legal proceedings, but there is great heartbreak associated with the phenomenon in a case under way in the Four Courts.

Aoife Bennett (26) is suing the Minister for Health and others claiming that the swine flu vaccination she was given in school 10 years ago caused her to develop narcolepsy, as well as a condition called cataplexy disorder, which involves the sudden, unpredictable loss of muscle tone so that a person collapses. Her claims are contested.

The courtroom has rows of wooden benches on which black-gowned barristers sit facing the judge, with three tiered benches at the back for members of the public. Among those watching from these benches are others who believe they developed narcolepsy for the same reason as Bennett.

Sometimes, and despite the importance of what is being discussed in court, one of these people will nod off. Sometimes they sit upright, their eyes closed, like someone in an airplane trying to sleep in a confined seating arrangement. Sometimes they lean into a loved one, who puts an arm round them and holds them while, to use a phrase Aoife’s mother, Mary, used in the witness box, they “just nod off”.

Up until the vaccination was delivered in her local school in Naas, Co Kildare, in December 2009, Bennett was an energetic young woman who was often the first up in the house (she has three, non-identical quadruplet siblings). On the day she received the jab, she was worried that she might get a sore arm, and that this might interfere with her performance in an upcoming volleyball match where she was on the school team.

But by early 2010 she had changed, feeling terribly tired, finding it hard to get out of bed, and sometimes even having to use a wheelchair. In April she had her first sudden collapse, when she fell in the shower and broke a tooth.

It was not until a year after that, having attended multiple medical professionals in the company of her mother, including psychiatrists and psychologists, that she finally learned through the media that others who had received the vaccine were experiencing similar symptoms. In April 2011 she at last received a diagnosis.

There may be as many as 100 people in Ireland who believe they have developed the incurable, life-altering condition of narcolepsy as a result of the vaccination they received as part of Ireland’s response to the 2009 global swine flu pandemic. The number of such cases across Europe is said to be in excess of 1,000.

A number of related topics will form the core of the dispute, including whether the vaccine causes narcolepsy. The court is to hear expert evidence about auto-immune responses, and the extent to which scientists understand why sometimes a body reacts to viruses and foreign bodies in such life-crippling ways.

It will hear evidence about the extent to which the vaccine, Pandemrix, produced by Glaxosmithkline Biologicals (GSK), was tested. The vaccine was authorised by the European Medicines Agency on June 20th, 2009, against the backdrop of the World Health Organisation having declared the 21st century’s first flu pandemic.

A core issue is what Bennett was or should have been told about the vaccine in order to be able to opt to receive it on the basis of informed consent.

It was not until August 2010, half a year after the vaccine was administered to Bennett, that the first concerns began to emerge that Pandemrix might be associated with narcolepsy. According to GSK, the studies that were launched as a result, have yet to show a proven link. Pandemrix is no longer on the market, as GSK did not seek the renewal of the original authorisation.

Bennett’s case is a test case, meaning that if she wins, it is likely that others will make similar claims. The financial stakes from the State’s point of view are most likely in the nine-figure region. GSK got an indemnity from the State when selling the vaccine in 2009.

The purpose of the lengthy hearing now under way is to decide on the issue of liability. If the eventual decision of Mr Justice Michael McGrath is in favour of Bennett, then another case will immediately follow to decide on the question of damages. The court has been told cases have been settled confidentially in other jurisdictions.

A number of the State’s leading barristers are involved in the case, which is likely to last into next year. Bennett, who has completed teacher training college and is now pursuing a master’s degree, is being represented by Michael Boylan solicitors.

The Minister for Health and the HSE, who are defendants, have former attorney general Paul Gallagher SC and Maurice Collins SC (who is soon to become a judge of the Court of Appeal) on their team, as well as Brian Kennedy SC and juniors Séamus Breen and Caren Geoghegan, instructed by Hayes solicitors. The same law firm is instructing the legal team representing the (indemnified) vaccine manufacturer.

The fourth and final defendant is the Health Products Regulatory Authority, which has responsibility for the monitoring of medicines. Its team comprises Rossa Fanning SC, Margaret Gray SC, and Conor Quinn BL, instructed by Eugene F Collins solicitors.

The Bennett family has been forthright in saying that this is not an anti-vaccination case and that they fully understand the importance of vaccination for the individual and for society. Her father Pat Bennett has worked for the HSE for 40 years and says he is proud of his work in the delivery of public health services. But they say the administration of the Pandemrix vaccine was badly mismanaged.

Across Europe, approximately 30 million doses of Pandemrix were administered. Ireland was one of four European countries that administered the vaccine through the school system. In all, 946,896 Irish people were given the vaccine, or 22 per cent of the population.

The HSE estimates that 1,059 people were hospitalised during the swine flu pandemic, of which 100 were so ill from the virus they had to be moved to intensive care. It is believed 27 people died.

‘Unseasonably windy’ weather set to buffet country 11:14
Man (21) arrested after shooting at gardaí in Cork city 10:58
‘Only a civil servant’ could have come up with ‘unenforceable’ pub regulations 10:16
Guinness Cork Jazz Fesival cancelled because of Covid-19 10:13
Coronavirus: Donations to Catholic Church down 80% 04:35