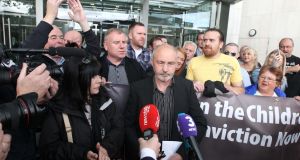 Defendant Peter Herbert outside Dublin Circuit Criminal Court after defendants were all found not guilty on charges of false imprisonment of then-tánaiste Joan Burton at a water charges protest in Jobstown in 2014. Photograph: Collins Courts 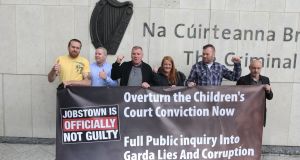 Defendants Paul Kiernan, Keith Preston, Declan Kane, Antoinette Kane, Tommy Kelly and Peter Herbert outside Dublin Circuit Criminal Court after they were all found not guilty on charges of false imprisonment of then-tánaiste Joan Burton at a water charges protest in Jobstown in 2014. Photograph: Collins Courts

When news broke last month that charges against the Jobstown protesters were being dropped, defence solicitor Michael Finucane said he hoped the case would end “not with a bang but with a quiet withdrawal”.

He got half of his wish – the case ended on Monday afternoon not with a bang, but with the sound of an air-horn in the packed court 19 of the Criminal Courts of Justice.

As soon as Judge Melanie Greally officially struck out the charges and rose from the bench, a ripple of applause spread through the dozens of supporters at the back of the court.

This grew quickly to cheers and then chants of “Jobstown Innocent, Labour Guilty”. These were followed by calls for “justice” for the 17-year-old who was found guilty last year of falsely imprisoning Tánaiste Joan Burton and her adviser Karen O’Connell in their car during the 2014 anti-water charges protest.

The boy, who was 15 at the time, remains the only person found guilty of an offence in relation to the event.

The dozens of Jobstown supporters then launched into a chant of “What do we want?” to which the response was “A public inquiry”.

This is the new battle cry for Solidarity TD Paul Murphy and his fellow protesters. They demand an investigation take place into alleged perjury by gardaí during the first trial, which saw Murphy and five others acquitted of all charges.

There appears to be little political appetite for such an inquiry. Taoiseach Leo Varadkar has already ruled it out, as has the Garda, although the force has launched an internal review on how the protest itself was policed.

Murphy was in court for the brief hearing on Monday, following on from the disposal of his case last June. He sported a wide grin at the outcome, but declined to join in the chanting.

The jubilation culminated in the repeated sounding of an air-horn by a woman. The presence of the device left some court staff wondering about the standards of security employed at the building’s entrance, but in the end the supporters were allowed to enjoy the moment.

The cheering and blasts of air-horn continued in the hallways and on the courtroom steps, where the group posed for photographers before one of the formerly accused men, Peter Herbert, promised the campaign for an inquiry would continue.

“The only way we will get answers to these vital questions for civil liberties in this country is to have an independent and public inquiry,” he said.

“We are very disappointed that the Government has so far ruled out establishing one. Given this latest development, we urge them to do so now.”