One Year On: Michael and Rose Murray make last-minute appeal to councillors 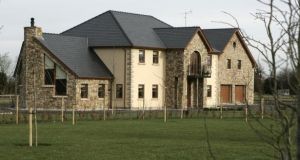 In the words of the courts, the construction of the nearly 600sq m house outside Navan, Co Meath, was “a flagrant breach of the planning laws” and “completely unjustified”.

The two-storey house owned by Michael and Rose Murray, which was built in Faughan Hill, Bohermeen without any planning permission, still stands even though the Supreme Court ordered its destruction a year ago.

The deadline for its demolition passed a month ago. Now, the council is taking legal advice on what to do next.

Meanwhile, the Murrays have made a last-minute appeal to councillors.

In a letter to Meath county councillors, the Murrays say they do not have the money to demolish the house, which they claim would cost more than €326,000 plus VAT.

They are living “every day with the horror that someday a crane with a wrecking ball could arrive up to our home and level it to the ground”, the couple told local politicians.

However, sympathy in some quarters is slight for people who break planning laws. County councillors who spoke to The Irish Times expressed reluctance to get involved and declined to be quoted.

The couple live in the house with their three children – aged 12, 17 and 18 – and Mrs Murray’s mother, who is 80 years of age in July. Mr Murray grew up in the Bohermeen area and works as a plumber.

In a letter, the Murrays appealed to the council not to seek an application which would find them in contempt of court. They offered to pay all the council’s legal costs.

The Murrays, who have been in dispute with the council for years, say they made “a life-changing mistake” which they “deeply regret” and “accept fully that what we did was both arrogant and stupid”.

The couple were refused planning permission on two other sites before they bought the Faughan Hill land. People who bought those sites have since had “no problem getting planning”.

The final site was part of a field zoned agricultural when it was bought by the Murrays. Previous owners had agreed that one house would be built on the land for a farmer’s son, and the rest would be sterilised.

However, the Murrays say they had been confident of securing planning permission because a planning official had told them they had a favourable chance. They also say “it was known locally” that a number of developers were interested in the site.

The couple bought the site in 2006, and applied for permission to build a 283sq m dormer bungalow. That was refused. However, the Murrays went on to build a much larger 588sq m house.

The planning breach was reported, and Meath County Council opened an inquiry. The Murrays applied for retention in 2007. In February 2008 this was refused by An Bord Pleanála.

The house built by the Murrays was out of character for the area and represented an “unduly prominent and incongruous” feature on the local landscape, it ruled.

The Murrays offered to demolish part of the house. This was rejected by the council in November 2009. In July 2010 the High Court ruled that it should be demolished within two years.

It is up a quiet laneway well in off the road. No one locally is complaining. In fact, quite the opposite

In his ruling, Mr Justice John Edwards said: “They have sought to drive a coach and four through the planning laws and that cannot be permitted no matter how frustrated they may have felt, on account of earlier refusals.”

Now that the Supreme Court deadline has passed, the Murrays say they “are prepared to do anything whatsoever that the council requires of us, if only the council will agree to allow us to remain in our home”.

The house “is not intrusive in any way”, they argue: “It is up a quiet laneway well in off the road. No one locally is complaining. In fact, quite the opposite, all our neighbours are supporting us in our efforts to save our home.”

However, not everyone agrees. An email claiming to be from a Navan town residents group sent to councillors last week implored them to ensure the house is demolished.

Councillors should be “seeking accountability for the very significant public monies spent to date” by “ensuring that . . . the dwelling is demolished as per the findings of the Supreme Court”.

A failure to act on the Supreme Court’s ruling would “irreparably damage public confidence in the planning system and be viewed as an affront to the rule of law” and to “the citizens of Meath who abide by the planning laws”.

“There is now either one rule of law for everyone and the court order for demolition is enforced or there is no rule at all and it is ignored,” the unsigned email stated.

In their final appeal, the Murrays say the demolition will cost €326,000, plus VAT, while the outstanding legal bill runs to €200,000. They cannot pay it, they argue, so the council will face the bill.

If given time, the couple offered to pay the council’s costs: “We can certainly be held up as a warning to others and, on the one hand, be seen to be financially penalised and, on the other, save the ratepayers of Co Meath the consequences of having to underwrite in full, the costs and consequences of our wrongdoing.

“We are the ones who have done wrong here; the ratepayers of Co Meath are potentially entirely innocent victims,” the Murrays say in their letter.