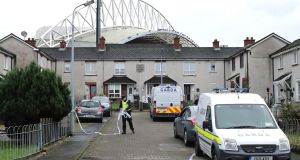 Gardaí at a house in Shanabooly Road in Limerick where the body of an 11-year-old boy was discovered on Sunday evening. Photograph: Niall Carson/PA Wire.

A man has been arrested in Limerick after the body of an 11-year-old boy was discovered in a house in the city on Sunday evening.

The boy’s body was discovered by gardaí at the house in Ballynanty shortly after 7pm. He was pronounced dead at the scene a short time later.

He was found with multiple injuries, according to a reliable source.

Gardaí say that following the discovery they arrested a man in his late 20s, who was detained under Section 4 of the Criminal Justice Act at Henry Street garda station in Limerick.

The scene has been preserved for a forensic and technical examination and the services of both the office of the state pathologist and Garda technical bureau have been requested, according to a statement from the Garda press office.

It continued: “The investigation is ongoing. No further information is available at this time”.

Sources said the boy and the man are known to one another.

The two-storey terraced house on the Shanabooly Road in Ballynanty where the body was found, situated in the shadow of Thomond Park rugby stadium, has been sealed off.

A cul de sac of 11 houses including the house where the body was discovered has also been sealed off.

Garda sources said the boy’s body would remain at the house overnight.The state pathologist is expected carry out a preliminary examination of the body at the house on Monday morning.