Man, who gardaí are still working to identify, is eighth cyclist to die on State’s roads in 2019 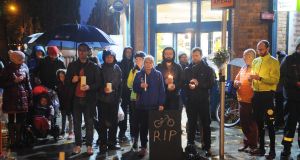 Cyclists and local residents held a vigil at the scene where a cyclist was killed on Friday morning near St James’s Hospital in Dublin 8. Photograph: Aidan Crawley/The Irish Times. 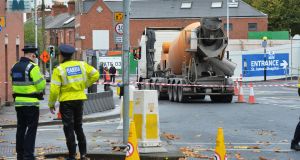 The scene of a fatal collision between a cement mixer truck and a cyclist just outside the rear entrance to St James Hospital and the construction of the National Children’s Hospital. Photograph: Alan Betson/The Irish Times

A vigil was held on Friday night in memory of a male cyclist who died following a collision with a cement mixer near St James’s Hospital in Dublin.

The incident happened between 8.30am and 9.15am on Friday morning as the truck was turning left off the South Circular Road at the junction with Brookfield Road.

Investigating gardaí said the cyclist had no identification on him and that his identity and age remained unknown. They were trying to locate family members in an attempt to aid their investigation. Locals said they did not believe the man lived in the area.

It remains unclear as to whether the cyclist was also turning left or if he was crossing the road but minor damage was visible on the truck’s front left bumper. The truck was en route to the site where the national children’s hospital is being built. The junction remained closed until the early afternoon while Garda forensic collision investigators conducted an examination of the scene.

Around 50 local residents and campaigners for improved cycling infrastructure attended the vigil, which was organised by the Dublin Cycling Campaign.

Catriona Campbell, a local resident, said the danger posed by the junction was an issue the community had raised with Dublin City Council “for many years”.

“We always said that it’s a matter of time until someone loses their life and it’s terrible that we’re here today in that circumstance,” she said. “It’s so incredibly sad. This could have been avoided.”

“This is just tragic and shouldn’t have happened. People should be able to cycle safely.”

Ms Williams said there was a need to have more physical infrastructure between cycle routes in Dublin and motorised traffic.

“A few painted lines are not going to protect you,” she said. “On paper it looks as if Dublin is progressing, but when you look at what is actually happening, it is very disappointing.”

Staff from a Mace shop, located next to where the collision happened, were visibly shaken by the news but said no one witnessed the incident.

Gardaí are appealing for anyone with information, particularly any motorists who may have been on the South Circular Road between 8.45am and 9.15am and who may have dash cam footage, to come forward. They are asked to contact Kevin Street station on (01) 6669400, the Garda Confidential Line on 1800 666 111 or any garda station.

Statistics on the Garda website showed seven cyclists were among the 122 people who had died in road traffic incidents in the State between the start of the year and Thursday.