Value of drugs found inside four parcels sent from Britain and US estimated at €25,400 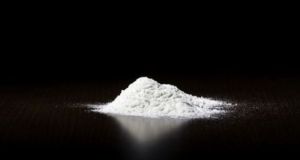 Cocaine and herbal cannabis have been discovered in parcel post in Dublin hidden inside a pair of Nike Max Air trainers and in parcels declared as a woman’s coat and child’s toy.

The combined value of drugs found inside the four parcels, which had been sent from Britain and the United States, has been estimated at €25,400.

Revenue’s Customs Service said the discovery had been made as a result of routine screening operations and with the assistance of drug detection dog Bailey.

Some 1.2kg of cannabis herb was found inside three parcels marked as a Vintage Tommy clothing, a Hot Wheels toy car and a Forever21 Woman’s coat. In the remaining parcel 20g of cocaine was concealed in the Nike Air Max trainers.

All four parcels were destined for the same address in Dublin and a criminal investigation into the origins of the drugs and their intended recipient was continuing.

Seizures of drugs in the postal service have become more common in the past decade as the number of people on the darknet offering drugs for sale online has increased exponentially.