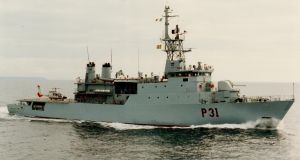 Fianna Fáil has called on Minister for State for Defence Paul Kehoe to publish documents that would confirm his assertion that two Naval vessels are docked for maintenance and not because the Naval Service does not have the personnel to man them.

The party’s spokesman on defence, Jack Chambers, has said the maintenance schedule for both ships should be published by Mr Kehoe.

Mr Chambers said that if the two ships were now docked for significant maintenance, this would have been planned for some time and Naval Service documents would prove this.

“The Minister should publish the maintenance schedule for every ship in the fleet for this year to clarify what is happening,” he said.

Mr Chambers said the Minister had over the weekend involved Defence Forces chief of staff Vice Admiral Mark Mellett in the controversy. He claimed Minister Kehoe and had effectively undermined the vice admiral, and the head of the Naval Service, Cmdr Mick Malone.

Mr Kehoe at the weekend took to social media to state that Mr Mellett told him the docking of the ships was for “planned maintenance”.

In a newsletter to Defence Forces personnel, Cmdr Malone cited manpower shortages for the decision to dock the LÉ Eithne and the LÉ Orla.

While the Naval Service was tasked with operating nine ships there was “an establishment for 6½” because so many personnel had departed and so steps had to be taken to manage the fleet on reduced resources,” Cmdr Malone wrote.

“This will be achieved by placing two ships, the LÉ Eithne and the LÉ Orla, in an operational reserve capacity until adequate numbers of sufficiently qualified and experienced personnel are available.”

A spokesman for Mr Kehoe said a Defence civilian and military group was meeting this week to discuss a range of matters.

“The focus of the Minister is on charting the return of the Naval Service to full capacity. This will take time. He will be kept briefed on the considerations of the civil-military group.”

The deepening dispute over the two vessels comes in the context of the Defence Forces haemorrhaging personnel in recent years. Numbers are now more than 1,000 below the minimum 9,500 at which they are supposed to be maintained.

While a package was unveiled last week to increase Defence Forces allowances, sources within the forces say it fell far short of what was hoped for. Some said it would probably accelerate departures because it was now clear remuneration was not going to improve in any meaningful way.