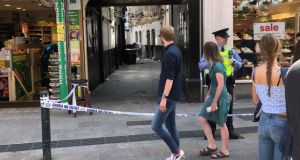 The scene sealed off on Sunday at Adam Court, off Grafton Street, where the fracas took place. Photograph: Dan Griffin

Gardaí are investigating a significant fracas involving up to 20 men who tried to rush the door of a popular Dublin nightspot after the Longitude festival on Saturday.

An assortment of weapons including hatchets, knives and petrol bombs were found when the gang dispersed.

The incident occurred outside the Lost Lane venue, formerly Lillies Bordello, off Grafton Street in the south inner city after shortly 1am on Sunday.

A security guard working in the area was injured and one man was arrested. However, gardaí believe significant violence was averted by the arrival of members of the force on the scene immediately as the trouble flared.

The group gathered outside the venue and tried to gain entry before being refused and then attempted to rush the door.

Those involved dispersed when they realised gardaí were responding. However, some of the men were stopped and searched in the streets close to the venue.

Lost Lane, which is down the Adam Court laneway off Grafton Street, was sealed off on Sunday as gardaí carried out a forensic examination.

A large number of weapons were also being forensically examined and CCTV recorded in the area was being reviewed as part of the investigation, which is being carried out by a large team of gardaí.

The Garda confirmed it was investigating the incident which began when “a large number of male youths congregated outside a premises on Adam Court, Dublin 2” at about 1am.

“A number of offensive weapons were located after the youths departed and were seized by gardaí. One male in his early 20s was arrested and was charged in relation to this offence. Investigations are ongoing”.

None of the patrons of Lost Lane nor anybody else on the premises on Saturday night into Sunday morning was in any way involved in what took place outside.

However, gardaí believe a number of people who were at Longitude festival in Marlay Park, Rathfarham had gone to Lost Lane to continue socialising. Gardaí further suspect the men who tried to rush the door of the venue had also been at the festival.

Gardaí are treating the serious fracas as a spill over incident from Longitude. If the weapons found stashed around the Grafton Street area were linked to the men who tried to rush the door at Lost Lane, gardaí say that would confirm their suspicions the attempted gang attack was pre-planned.

Before the three-day Longitude festival began last Friday, the US Department of State Bureau of Consular Affairs tweeted a security alert about the event aimed at US citizens in Ireland.

“Reports indicate a potential for violence at the Longitude Festival taking place from July 5-7 in Marlay Park,” it said.

“Police have increased event security and are monitoring the situation. Be aware of your surroundings and exercise caution if in the area.”