Belfast rape trial: What are the charges and what must jury do to reach verdicts? 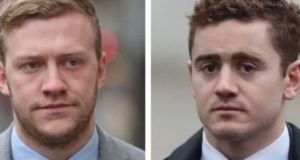 Stuart Olding (left) and Paddy Jackson deny the charges against them.

The jury in the rape trial of Ireland and Ulster players Paddy Jackson and Stuart Olding is due to start its deliberations on Tuesday.

Mr Jackson is alleged to have raped and sexually assaulted the then 19-year-old Belfast student in his bedroom during a gathering in his house in the early hours of June 28th, 2016. Mr Olding is accused of orally raping her at the same time. Their friend Blane McIlroy is alleged to have then entered the room naked and told the complainant: “You f***ed those guys. Why not me?”

A fourth man, Rory Harrison, is accused of trying to cover-up the alleged rape by giving police a misleading statement and deleting relevant text messages.

The men have denied the charges.

To convict each of the men the jurors must be convinced the prosecution has proved all elements of the individual charges. If they have doubts about any of the constituent elements of a charge they must acquit the men on that count.

Below is an explanation of the charges and also the questions to be dealt with by the jury.

Paddy Jackson is accused of vaginally raping the woman with his penis in the early hours of June 28th, 2016. He denies any vaginal intercourse took place but says the woman performed consensual oral sex on him. To convict the jury must be sure:

Judge Patricia Smyth said consent has a particular legal meaning: “A woman consents if she agrees by choice and has the sense and capacity to agree by choice.”

Consent is different to submission. Consent can be given, even with reluctance. But when a woman is so overwhelmed by fear that she does not resist, that is not consent, she said.

The prosecution do not have to prove she fought back or that she said she did not consent.

Mr Jackson is also accused of sexually assaulting the woman on the same occasion by penetrating her with his fingers. The woman alleges he attempted to put his entire hand inside her. He says he digitally penetrated her consensually. To convict on this count the jury must be sure:

Stuart Olding is accused of raping the woman by inserting his penis into her mouth on the same occasion. He says she willingly performed oral sex on him. To convict on this count the jury must be convinced:

Blane McIlory is accused of exposing his genitals to the woman directly after the alleged rape. The woman alleges he entered the room naked, thrust his penis at her and said: “You f**ked those guys. Why not me?” Mr McIlroy says he entered the room fully clothed and the woman performed consensual oral sex on him.

Unlike the first three charges, the woman’s consent is not relevant to this accusation. To convict the jury must be convinced:

The charges against Rory Harrison are the most complex in legal terms. He is accused of perverting the course of justice by lying to police or omitting relevant facts which could have helped the investigation. Mr Harrison is accused of not disclosing relevant facts to officers when they took a witness statement from him on June 30th, 2016, two days after the alleged rape. These facts include:

The defence say he provided a truthful account and answered all questions put to him to the best of his ability. They deny he engaged in a cover-up to protect his friends.

To convict on this count the jury must be sure:

Mr Harrison is also accused of withholding information from police. Although it sounds similar to count 5, it is quite different and involves separate elements which must be proved by the prosecution before jurors can convict. Jurors must be sure:

Unlike the other allegations which all stand alone, for the jury to convict on this count it must be sure a rape occured. If it acquits Jackson and Olding of rape it must return a not guilty verdict on this count too.