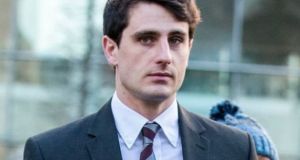 A jury in the rape trial of Ireland and Ulster rugby players Paddy Jackson and Stuart Olding has heard detailed evidence of text exchanges between the accused boasting about sexual activity.

Prosecuting counsel Toby Hedworth QC read an agreed list of texts into the record including several from Blane McIlroy, who is accused of exposing himself to the then 19-year-old complainant directly after she was allegedly raped by the Ireland rugby players.

The trial has heard Mr McIlroy told police the woman consensually masturbated and performed oral sex on him as she lay on the bed beside Mr Jackson.

The complainant has said there was no sexual contact. She alleges he thrust his penis at her and said: “You f***ed those guys. Why not me?”

The day after the alleged rape, at 1.08pm Mr McIlroy posted to a WhatsApp group entitled “The Juicers” a picture on him on a sofa with three female party guests. It was captioned “love Belfast sluts”.

Another friend joined in the texts saying: “Boys, did you lads spit roast lasses? Legends!! ... why are we all such legends?” to which Blane McIlroy responds: “I know. It’s ridiculous.”

At 11.49am that day Mr Jackson posted photos of the women at the party to the group. Another friend asked: “Who are they? Brassers?”

Two days after the alleged rape, at 11.28am, Mr McIlroy sent a message to a friend stating: “Pumped a bird with Jacko on Monday. Roasted her. Then another on Tuesday night.”

This was sent shortly before Mr Jackson and Mr Olding were taken in for questioning that day.

The trial continues Wednesday afternoon before Judge Patricia Smyth and a jury of eight men and three woman.