The fresh face of Russian communism

Communist Party candidate Pavel Grundinin has injected life into Russia’s presidential election. Is that why the Kremlin let him run? 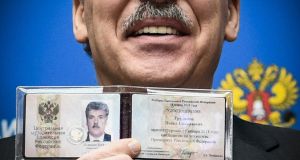 Whether they admit it or not, the seven politicians running against Vladimir Putin don’t have the slightest chance of winning Russia’s upcoming presidential election. But for some reason pro-Kremlin media has got it in for Pavel Grudinin and has been undermining his campaign.

Grudinin is the boss of a former Soviet collective farm outside Moscow, and the Russian Communist Party’s candidate. Many people were surprised when Gennady Zyuganov, the veteran leader of the party, announced in December that he would not stand for president again and nominated Grudinin to take his place on the March 18th ballot.

The Russian Communist Party could certainly do with a fresh face. As an established member of Russia’s tamed “systemic opposition” the 73-year-old Zyuganov has lost three elections to Putin and admits he lacks the strength for another campaign.

Grudinin, who supported Putin’s first bid for the presidency in 2000 and was a member of the Kremlin’s United Russia party for a few years, was not an obvious choice of communist candidate. He doesn’t even hold a party card.

By selling off parcels of farm land to city property moguls, Grudinin was able to fund construction of housing and a school at the Lenin Sovkhoz

Yet he appears to be having some success in convincing voters of his plans to transform Russia from a corrupt oligarchic state into a “territory of social optimism,” much like the Lenin Sovkhoz farm where he grew up and which he now runs just outside Moscow’s outer ring road.

A recent survey by the Russian Public Opinion Research Center, a pollster that often works for the Kremlin, indicated that voter support for Grudinin had risen from near zero at the start of the campaign to 7.3 per cent. This is way behind Putin’s 71.5 per cent, but a whisker ahead of Vladimir Zhirinovsky, the clownish head of the nationalist Liberal Democratic Party, who usually competes with the communists for second place in presidential elections.

It’s hard not to agree that Grudinin has worked wonders at the Lenin Sovkhoz, which he helped transform after the demise of the Soviet Union from a state controlled collective farm into a closed shareholding society where he owns just over 40 per cent stake.

By selling off parcels of farm land to city property moguls, Grudinin was able to fund construction of housing and a school at the Lenin Sovkhoz that is now famous in the Moscow region, not just for its creamy milk and delicious strawberries, but for the comfortable life enjoyed by its 300 workers. There’s even a kitschy Russian fairy tale-themed amusement park in the grounds that’s open to the public.

Some commentators suspect that Grudinin’s only motive for running in an election that he knows he will lose is to raise his political profile and ward off hostile investors who might covet Lenin Sovkhoz valuable land.

What seems to really fire up Grudinin is a determination to fight corruption and bring an end to the clannish, oligarchic system

Certainly there are questions over whether Grudinin is serious about replicating the Lenin farm business model on a national scale.

Russian economic commentators have poured cold water on the “Twenty Steps for Pavel Grudinin” campaign manifesto that calls for sweeping nationalisation, high taxes and free national healthcare and education. They say it is inefficient and unrealistic.

But what seems to really fire up Grudinin is a determination to fight corruption and bring an end to the clannish, oligarchic system of capitalism that has taken hold in Russia under Putin.

“All business in Russia is built on basis that you have to be relative or friend of some official or pay a huge bribe,” he told Novaya Gazeta, an independent Russian newspaper this week. “Corruption has to be stopped. We need fresh air.”

As a new face on the election ballot, Grudinin was bound to attract media attention. But as his rating surged in the polls last month, the publicity turned nasty and has for the most part stayed that way.

As a communist candidate Grudinin is an easy target for accusations of double standards – not least because, with a declared average annual salary of 26 million roubles (€373,000) over the past six years, he is far better paid than workers at the Lenin farm and, by Russian standards, extremely rich.

After allegations that Grudinin had money tucked away in European banks surfaced on Russian social networks in January, Russian federal television channels jumped on the story even though Zyuganov vouched that the Communist Party candidate had closed all his foreign accounts at the start of the election campaign.

A cargo of humanitarian aid sent by the Lenin Sovkhoz to Ukraine’s war-torn Donbass region had been found to contain past-use-by-date, mice-infested food

Next came stories that Grudinin’s family owned a fancy villa in Spain and property in the Baltics that have been harder to deny.

Grudinin has bombarded the Russian authorities with complaints about media bias, saying the overwhelmingly critical coverage of his campaign violates voters’ legal right to objective information. But nobody seems to be listening.

Dmitry Kiselyov, a prominent Russian state TV presenter who is on a European Union sanctions list for supporting Kremlin propaganda, derided the Communist Party campaign for a full five minutes on weekly news show last Sunday, against a video of elderly former Lenin Sovkhoz employees protesting that Grudinin had cheated them out of their land.

With the election campaign entering its final phase, candidates are preparing to face off in live TV political debates that begin next week. Putin, who rarely engages in public with opposition politicians, is not planning to participate.

That leaves Grudinin, already in the focus of media attention, as the likely star attraction of the shows. It sounds as if he is dreading it. Media used to be independent, he lamented this week, “But it has gone over to the side of evil. It tells lies.”

In the tightly controlled world of Russian politics, it’s unthinkable that the Kremlin would have allowed Grudinin to run for the presidency unless he was seen as an obedient servant or at least of some use. Some political commentators believe that his main function may be to spice up the otherwise dull and predictable campaign and encourage people to vote.

For election planners the main concern is not that Putin might lose – there’s not much danger of that – but that voter turnout will be too low to give legitimacy to his fourth presidential term.

At the same time there’s a risk that the Communist Party campaign might not be as controllable as once thought, says Andrei Kolesnikov, head of the Russian domestic politics programme at the Carnegie Moscow Center. As a “bright fresh new face” in the election, Grudinin may be able to attract votes from beyond the core Communist Party support base. “We don’t know where they are going to draw the red line – will it be 8 per cent or 10 per cent?” he told Echo Moskvy radio.

From the campaign trail, Communist Party followers think Grudinin can do much better than that. Sergei Udaltsov, the head of the Left Front political movement, estimates that a free and fair rating would put support for Grudinin’s at 21 per cent. “And there’s still another month of campaigning go,” he says.