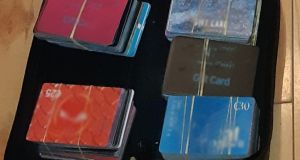 Some of the 500 blank cards seized. Photograph: An Garda

Two men remain in Garda custody on Tuesday after their arrest 24 hours earlier in an intelligence-led operation in Co Meath.

Several pieces of equipment used to skim card details from ATM users were seized and the men were arrested under legislation used against suspects involved in serious organised crime.

The seized equipment fits over the top of an ATM machine and looks very similar to a normal ATM.

When a customer’s card is then inserted the card data is skimmed by the equipment and the user’s pin number recorded by a concealed mini camera.

The data skimmed from the bank cards can then be cloned onto blank cards and married with the pin before being used to withdraw money.

“The two men, both Romanian nationals, were arrested at the scene and are currently detained at Navan Garda Station pursuant to Section 50 of Criminal Justice Act.”

Gardaí say while public awareness has been raised about the need to be vigilant while using ATMs, this type of card fraud remains very lucrative and not uncommon in the Republic.

The two men, who are from Romania, are known to the Garda and police forces in other jurisdictions for their suspected links to ATM crime.

One of the men is regarded as a senior figure in an organised crime gang, made up of Romanian nationals, suspected of travelling Europe to carry out holiday-related ATM crime.

Inquiries to date suggest they had decided come to Ireland to allegedly carry out ATM skimming around the St Patrick’s Day festivities and they had been to other European countries for their national holidays and other major events.

“They know on a week like St Patrick’s Day there will be a lot of people around and lots of tourists all out spending money,” said one source.

“And these are often the times when people may not be watching how they use an ATM machine or watching their bank accounts online for anything unusual. People are partying and their guard is dropped and that’s what these people (ATM skimmers) prey on.”

The suspects arrested yesterday are in their 20s and 40s and are well-known to each other. They had visited Ireland many times before.

However, while the main figure was being sought in other countries, intelligence gathered by the Garda resulted in the man’s arrest in Navan, Co Meath, on Monday.

The skimming equipment was seized and the men arrested when a property was searched on Slane Road, Navan.

The operation was led by the Garda National Economic Crime Bureau, supported by gardaí from Navan Garda station.

Section 50 allows for the detention of suspects for up to seven days without charge; the longest period under Irish law a person can be questioned for.

It is used when those being investigated are regarded as senior organised crime figures.