ATM robbers will ‘keep going until they are caught’, says industry chief 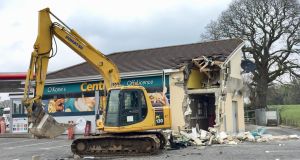 A cash machine was ripped from the wall of a filling station in Dungiven, Co Derry. Photograph: David Young/PA Wire

Criminals behind a recent spate of ATM robberies will keep going until they are caught, an industry representative has warned.

Ron Delnevo, European director of the ATM Industry Association, said experience in the UK and Europe shows robbers using construction equipment to rip cash machines out of walls will not stop until apprehended.

Mr Delnevo was speaking after a cash machine was ripped from the wall of a filling station in Dungiven, Co Derry – the eighth such theft in border areas in recent months.

He suggested towns and villages around Ireland form “ATM watch” groups to protect their “community asset”.

“What we need to do to stop these robberies is address how they are getting these vehicles and make sure we are alert to the fact that these vehicles are sometimes moving about at unusual times, and alert the authorities when we see that happen,” he said.

In the latest incident, the thieves used a digger stolen from a nearby work site to rip the ATM from the wall in Dungiven, Co Derry. The digger was located at the scene and detectives are hoping they can recover DNA evidence.

The private cash-in-transit sector, which makes cash deliveries and collections, and also fills many ATMs, loads cash into the machines in cassette-style cartridges, most of which are fitted with devices that explode ink if they are forced open.

Mr Delnevo said that in “far less than 50 per cent of cases” the robbers actually get any money from ATMs.

“There are things like dye in many ATMs and that does ruin the notes,” he said. “You don’t know for a fact if they are getting usable notes from these ATMs. All you are seeing from the headlines is that they are taking the ATMs but for all you know or I know the notes have been destroyed by dye and they are not able to use the money.

“Basically, criminals don’t find it easy to retire. Even if they do take an ATM and the notes are destroyed by dye, they will often try again in the hope that there is no dye coverage in the next site, and they will go on doing that until they are caught.”

Mr Delnevo told RTÉ radio that because the robbers behind recent ATM thefts in counties Derry, Tyrone, Fermanagh and Cavan, have had “some success”, they will likely “go on until they are caught”.

Suggesting communities form the equivalent of neighbourhood watch groups to protect the cash machines, he said “ATM watch schemes” could “watch over their ATM and make sure it is not easy prey for these criminals”.

“We need much firmer sentencing and much more serous view taken of this kind of crime,” he said.

Last week, the Police Service of Northern Ireland (PSNI) said several criminal gangs were behind the series of raids, with paramilitaries potentially cashing in on some of the proceeds.

“As in all of these ATM thefts, the actions of these criminals have not only caused immediate financial harm to the business targeted, but they have understandably caused fear in the community and impacted upon a vital service many local people rely on.

“We need people to report anything suspicious, including seeing any unusual activity or people in areas close to ATMs. For example, if you hear machinery late at night or in the early hours, please let us know. If you see any cars being driven in a suspicious manner close to where ATMs are located, please let us know.

“No matter how insignificant you think it is, call us and we will investigate. It could be key to catching the criminals responsible.” – Additional Reporting PA

Case arose out of alleged incidents in the summer of 1969

Family secures €165,000 settlement from hospital over treatment of 92-year-old