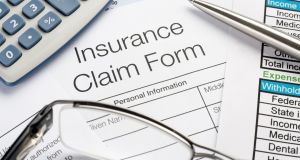 High levels of fraudulent or exaggerated claims are often suggested as a reason for the expensive premiums charged to Irish consumers. Photograph: iStock

Less than 20 suspected cases of insurance fraud have been reported to An Garda Síochána despite new guidelines introduced last autumn, an Oireachtas committee has heard.

High levels of fraudulent or exaggerated claims are often suggested as a reason for the expensive premiums charged to Irish consumers.

The revised guidelines for reporting suspected fraud were introduced last October. Giving evidence to the Oireachtas finance committee yesterday, FBD Insurance said it believed 20 per cent of its claims were fraudulent. The insurer said that it exposed about 50 per cent of these as being fraudulent.

“We catch about half of them, and we put a huge amount of effort and resource into this, including investing in very sophisticated artificial intelligence and analytics,” FBD chief claims officer Jackie McMahon told the committee, which is hearing evidence on the cost of insurance to small and medium-sized enterprise (SMEs).

Mr McMahon said detecting fraud in an insurance claim and meeting the standard of proof for a criminal charge were significantly different processes.

“The bar is very high on the evidence we need to prove fraud,” Mr McMahon told the committee, adding that many FBD customers felt that they had been on the receiving end of fraudulent claims.

“Knowing it’s fraudulent, and proving it to the standard of a court, and getting it to a stage where the Garda and the DPP will investigate, there are a number of steps there.”

However, Sinn Féin finance spokesman Pearse Doherty, who obtained the figures from the Department of Justice showing 19 suspected cases were reported to the Garda since October 1st last, questioned why the figures were so low. “Either insurance companies aren’t reporting what they’re seeing or they’re over-exaggerating what they’re seeing in order to justify the level of price gouging going on,” he said.

The committee was told that insurers were slow to raise the issue of fraudulent activity during a civil case over a claim as, if they couldn’t prove it, they could face a court order for aggravated or exemplary costs. Peter Boland, spokesman for the Alliance for Insurance Reform, told the committee he was “surprised” by the low level of fraud being reported to the Garda. “The experience of our members would suggest they were much higher than that.”

Mr Boland told the committee that businesses and consumers were being hit with “savage increases in renewals”. He said that reform of the sector was badly needed, but “the dead hand of vested interests and a lack of sufficient political will are grinding this process to a halt”.

He called for a specialist unit to investigate insurance fraud to be set up within An Garda Síochána. “We are bewildered at how long it has taken to establish this unit,” he said. “It must be established without further delay if we are going to meaningfully address the scourge of fraud and exaggerated claims.”

Neil McDonnell, chief executive of ISME, told the committee that the cost of insurance was “hollowing out Irish society”, and that it was curtailing sports organisations, charities and play groups, while simultaneously encouraging criminal activity.

In a statement following the meeting, Insurance Ireland said its members had been active in referring cases of suspected fraud in recent years. Its members have told it they had notified the Garda of 198 incidences of suspected fraud in the first half of 2018, it said. The industry body said it supported new public policy measures to tackle insurance fraud, including the new guidelines.

Play centre owner Linda Murray told the committee that her business was facing imminent closure due to an insurance premium of more than €16,000. She said that she had taken out a personal loan to pay her last insurance premium, but could not afford the latest increase.

Ms Murray became emotional while giving evidence to the Oireachtas committee. She asked the committee to “save our livelihoods, save the livelihoods of our staff, and give our children somewhere to play”. She said that in addition to her own business, she knew of another play centre in Cork which was facing closure this month due to the cost of insurance.

Only two companies, both from overseas, will insure her business, which is in Navan. She said she had been told that the high level of claims payments in Ireland was driving insurers away. “They’re afraid of what could potentially happen given the types of awards that are being given out,” she said, adding that the majority of awards are for “soft tissue [injuries], bruises or a split lip”, but that they could still receive up to €15,000 or €20,000 from insurance payouts.

She said that claims in her sector were steady, yet premiums were increasing by 300 per cent in a single year.

Ms Murray told the committee that a member of a group of play centre owners who have received support from the Alliance for Insurance Reform, which operates miniature trains for children in shopping centres, was charged £1,500 for insurance in the UK, but was quoted €33,000 for its Irish operations.

She said that once an injury happens, however minor, “some people are thinking ‘what could I get for that’ . . . that needs to be nipped in the bud.”

1 Coronavirus: A further 123 cases reported in meat processing plants over past week
2 Luke ‘Ming’ Flanagan bares his bottom half to European Parliament
3 Barack Obama urges those protesting in US to seize the momentum
4 Miriam Lord: Michael Ring came to praise his department, not bury it
5 Mother of three (41) who had to fundraise for her own cancer treatment has died
Real news has value SUBSCRIBE