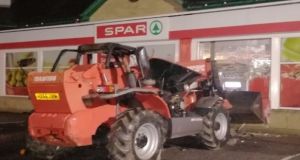 A PSNI photograph of a stolen machine that was used in at attempt to remove an ATM from a shop in Co Tyrone.

The PSNI has appealed to the public to lock up heavy plant machinery over the weekend after a number of ATM thefts.

Detective chief inspector David Henderson said the attacks on ATMs are having a major impact on local communities on both sides of the Border.

“We understand that these attacks are having a major impact on local communities and we are doing all we can to catch the people responsible. We have a dedicated team of detectives investigating the attacks and local Chief Inspectors are briefing their teams on the ground on a daily basis. We have also increased the number of neighbourhood policing teams carrying out night-time patrols in areas which could be vulnerable to an attack,” he said.

In the past year in Northern Ireland and close to the Border there have been 12 ATM thefts.

“As we have seen with thefts in Newtownabbey, Omagh, Ahoghill, Moira, these criminals do not appear to be targeting a specific geographical area and it is impossible to patrol every ATM across Northern Ireland all of the time. This is why it is key that preventative measures are taken in order to stop further attacks and we are working alongside Retail NI, the banking sector to tackle the issue,” he said.

Det inspector Henderson said if criminals can not steal diggers and other heavy machinery, they can not tear our ATMs.

“We are also working closely with the construction sector and continue to ask people who own or use heavy plant machinery near commercial premises with ATMs to ensure that these machines are kept locked, secured and immobilised. It also means that these expensive pieces of machinery are not destroyed, nor can they be burnt out in filling station forecourts near petrol pumps - something which causes a serious risk to life,” he said.

He said the criminals carrying out these ATM attacks are often targeting small, local businesses who are providing a service to their communities.

“As a result of these thefts, some communities may be left without their only local source of accessing cash and people living in the area may have to travel considerable distances to find an alternative way to withdraw money. The livelihood of business owners who have worked for years to build up their businesses are also jeopardised,” he said.

“The key to stopping these crimes and getting ahead of these criminals is information from the public. We need people to report anything suspicious, including seeing any unusual activity, people or vehicles loitering in areas close to ATMs. If you hear machinery late at night or in the early hours please let us know,” he said.

Anyone with information is asked to make contact with the PSNI or Crimestoppers on 0800 555 111.

1 Six weeks of Level 5: Non-essential shops to close, no visitors to homes and a 5km travel limit
2 Life under Level 5: What will the next six weeks look like for the State?
3 Covid-19: State moves to Level 5 for six weeks with hopes of ‘meaningful’ Christmas celebrations
4 Cork city centre is hit by flooding as River Lee bursts its banks
5 With dramatic Level 5 U-turn, Government weakens its own authority
Real news has value SUBSCRIBE