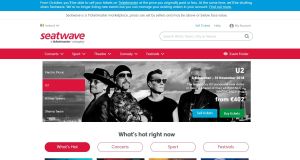 Seatwave’s website on Monday morning, with a notice about its closure at the top of the screen. Photograph: Steatwave.ie

Ticketmaster has announced that it is to shut its ticket resale operation Seatwave across Europe and will not be listing any new tickets for sale with immediate effect.

The move comes as legislation makes its way through the Dáil aimed at banning the resale of tickets at multiples of their face value, for events at designated venues which hold 1,000 or more people.

However, sources have suggested the Ticketmaster move is unconnected with legal moves in the Republic.

The company said it was closing its secondary ticketing sites Seatwave and GET ME IN! across Europe and will instead roll out a new “fan-to-fan ticket exchange” in Ireland and the UK in October with a similar service due across Europe in early 2019.

The new ticket exchange will allow fans to buy and sell tickets at the original price or less, the company said.

“Closing Seatwave and creating a new ticket exchange has always been part of Ticketmaster’s long-term plan. It’s not just in Ireland, it is happening across Europe, “ said Keith English, Managing Director of Ticketmaster Ireland.

“Our number one priority is to get tickets into the hands of fans so that they can go to the events they love. We are aware that fans are tired of seeing others snap up tickets just to resell for a profit on secondary websites, so we have decided to take action.”

He said the new Ticketmaster ticket exchange would let fans “sell tickets they can’t use directly through their Ticketmaster account, for the price originally paid or less.”

Seatwave has come in for fierce criticism from music fans, politicians and consumer watchdogs in Ireland for years over concerns that it was facilitating ticket touting.

There have been frequent reports of tickets for popular events selling out in minutes with many reappearing on Seatwave and the other main ticket resale website Viagogo at a multiple of their original value.

Last year the State’s consumer watchdog, the Competition and Consumer Protection Commission, launched a wide-ranging investigation into ticket-touting in the Republic.

It began the inquiry into “suspected breaches of competition law in relation to the provision of tickets and the operation of ticketing services for live events” last year.

The move was prompted by concerns over the speed at which tickets for high-profile events were selling out and how such tickets were subsequently reappearing for resale at vastly inflated prices on secondary sites such as the Ticketmaster-owned Seatwave, Viagogo, and other online platforms.

The focus of the investigation was on potentially anti-competitive conduct by operators in the sector. Among the issues the inquiry is looking at are exclusive arrangements and high service charges.

In the UK, the Competition and Markets Authority (CMA) has held its own inquiry into the secondary ticketing market.

Fine Gael TD Noel Rock said he welcomed the decision but added that it was “no coincidence” it came just days after Cabinet had backed legislation aimed at clamping down on the resale of tickets at inflated prices.

“As recently as May 2017, Ticketmaster described any legislation banning touting as being ‘ineffective’,” Mr Rock said. Ticketmaster’s conversion to my point of view on the scourge of touting is better late than never.”

He said “stamping out ticket touting is good news for matchgoers, concert-goers and consumer protection in general. I am satisfied to see this news, but fully intend to see the legislation through to conclusion so that such operations are never able to spring up again.”