Pricewatch: No TV, blatant lies and lack of communication from Sky 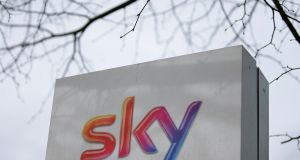 Several other readers have been in touch with us in recent months with very similar stories. File photograph: Leal-Olivas/AFP/Getty Images

This story about Sky may sound familiar to eagle-eyed Pricewatch readers. Deirdre Lanigan signed up with Sky television and broadband at the end of last November in a Sky outlet in Thurles Shopping Centre in order to avail of a free television offer. “There was no mention in the shop of having to ‘claim’ my television through an email which would be sent to me,” she says. “There was no sign of the television which initially didn’t worry me, as I was trying to get the broadband sorted,” she writes.

“During the course of a broadband conversation in January I inquired as to when I should expect my television, and was told that I would have to have paid at least three months of bills before I could expect that. Having seen no sign of the television and with seven months of bills paid, I contacted Sky again. I spoke to reps on the phone and their managers. I was told that as an email had been sent to me on December 21st and I’d failed to claim the television, there was nothing I could do.

“I never received such an email. I looked for transcripts of my phone conversations. At that point, a manager said she would ring me the next day, either having sorted the television situation or telling me how to get the transcripts. I carried my phone with me all day, into every room and every building I entered – no phone call. I rang back the number the next day and was greeted with an automated message stating that they had tried to ring me the previous day and with no further information or options. By now I was furious. This was a blatant lie,” she says.

Just before she went on holidays earlier this summer she rang Sky again and said that she wanted to make an official complaint. “I was given an official complaint number and told that I would hear from a manager in the next three to five days by phone or email. I explained I would be away on holidays, in case I didn’t answer the phone immediately, until August 3rd. At that point, I thought they said I would receive an email if they couldn’t reach me by phone. That was on July 19th. I have had no contact with Sky since.”

She says she is “beyond frustrated. I found Sky great to deal with solving my broadband issue. This has been a whole other scenario. They even said I lied about signing up in the shop, as the numbers didn’t match and it wasn’t possible. The shop, however, rang Sky to back me on this issue, and with regard to the television – to no avail.

“I’m just wondering where do I go next. My heart sinks at the thought of ringing Sky again and going around in the same circles. How are they getting away with such poor customer service and telling of blatant lies? I would have thought that after you highlighted the situation in your article that things would have improved. They haven’t.”

We contacted the company and a spokeswoman said: “Our free TV offer is one of the most popular promotional campaigns that Sky runs. On this occasion the manual entry of an incorrect email address resulted in the customer missing out on the promotional offer email. In subsequent communication with this customer we fell short in terms of the excellent customer service we pride ourselves on. Sky has been in touch with the customer and has resolved this matter with them. We have also introduced a number of new steps which should eliminate similar issues arising in the future.”

Several other readers have been in touch with us in recent months with very similar stories.