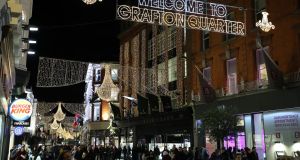 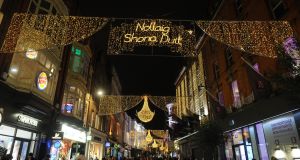 The business organisation responsible for installing Christmas lights in Dublin city is coming under increasing pressure to remove a new sign welcoming shoppers to the Grafton Quarter.

The new lights, which replace the old “Nollaig Shona Duit” sign, have been installed by the Dublin Town organisation, but other city business groups, Dublin City Council chief executive Owen Keegan, and hundreds of Twitter users are unimpressed by the new branding.

“It’s a personal view, but I don’t like it,” Mr Keegan said. “I would much prefer a bilingual sign.” Mr Keegan said he did not know if the council management had been consulted on the matter.

Adrian Cummins, chief executive of the Restaurants Association of Ireland said he would prefer it if the Nollaig Shona Duit sign was reinstated. “I think it’s a bit disrespectful to the Irish language at a time when we are trying to encourage and promote the use of the language.”

Mr Cummins said his members paid towards the lights through their mandatory contribution to Dublin Town, but had not been consulted about the change.

“This has been badly managed and badly handled. Dublin Town has gone on a solo run here and they got it wrong. No one calls it the Grafton Quarter. They should just take it down and put the other sign back up.”

Graeme McQueen head of communications with Dublin Chamber of Commerce was among those who took to Twitter to lament the installation of the new sign. He said the sign “looks awful” and that Grafton Quarter was “not a name that resonates with Dubliners”.

Speaking to The Irish Times Mr McQueen said the views expressed were personal and not those of the Chamber. “People know it as Grafton Street, Grafton Quarter looks a bit corporate.”

Dublin Town and its chief executive Richard Guiney did not respond to requests for comment.

The Grafton Street Quarter was a branding exercise devised by the city council six years ago as part of plans to upgrade the street and the surrounding area. The Grafton Street Quarter Public Realm Plan involved reducing traffic lanes, widening footpaths, removing parking and developing street cafes in the largely Georgian and Victorian area from St Stephen’s Green to College Green and from South Great George’s Street to Kildare Street.