Pricewatch: Reader threatened by debt collectors for bill he was not aware of 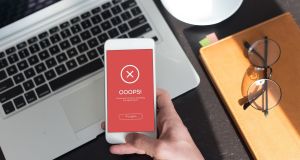 When the reader wrote to Pricewatch he said he was at his ‘wits end’. Photograph: iStock

The largest volume of complaints we get on an ongoing basis by some measure are connected with communications companies. Every time we get a mail or a letter or a call from a disgruntled, and sometimes deeply distressed, reader we marvel at the companies uselessness when it comes to actually communicating with their paying customers in any meaningful way.

And so it is this week. “It’s a long story,” started the mail from a reader who asked us not to use his name. “In November 2019 Three Mobile claimed that my direct debit was declined by AIB Visa,” he writes. He points out that the direct debit in question had been in use since his first mobile phone way back in the early 1990s and there had never been a problem before.

“When contacted Visa said that no direct debit had been presented and the bank confirmed this by letter,” he says. “The same thing happened in December 2019 so on my daughter’s advice I changed to GoMo and notified Three accordingly. It seemed that Three system/operations were at fault, not Visa.”

As a result of the move our correspondent was delighted to note that his regular monthly bill went down from an average of €90 to about €10.

Sadly the story did not end there.

“Three kept sending my bill notifications each month for the account and I received a stream of phone calls. I kept telling them that I was no longer a customer but the harassment continued. I felt pressurised and harassed and eventually under duress I paid Three €154.87 on January 31st, 2020 and once again under extreme pressure I paid €139.92 on August 10th, 2020, just to get them off my back as had they sent me a letter dated July 22nd threatening to involve a debt collection agency.”

While the story would have been pretty shocking if it happened to anyone, it seemed to us doubly shocking as it was happening to an older person

Our reader then wrote to the man who had signed that threatening letter pointing out that he “had not been a customer of Three since January 2020 and received an email reply from [a different named person] stating that the outstanding bills referred to a Broadband account.”

The mail says that this was the first time he learned of this broadband account “and I was taken aback as I NEVER had broadband from Three. My broadband supplier was originally UPC (from 2005 I believe when I moved here) which morphed into Virgin my current supplier.”

When he wrote to us he said he was at his “wits end and even though I no longer answer the constant phone calls (two last weekend on Saturday and Sunday) and another bill this time by email on September 22nd. He then pointed out that he was a man in his 80s and caring for a person with dementia.

While the story would have been pretty shocking if it happened to anyone, it seemed to us doubly shocking as it was happening to an older person who had enough on his plate without having to deal with letters threatening debt collectors from a mobile phone operator he believed he had severed ties with.

So we got in touch with the operator. In response we were told that from its records “we can see that the customer signed up for mobile broadband in 2012 and this would have been reflected in their monthly bill thereafter in addition to their voice plan. As requested by the customer in January 2020, their voice account was cancelled. The mobile broadband account remained active and billing continued as no cancellation request was made at this time. We understand that this experience has caused confusion and upset, so we will be refunding the customer retrospectively to align with the voice cancellation request made in January 2020.”

All it takes is more and better communication and surely that is not too much to expect from a, you know, communications company

There are a couple of things that strike us about this. First, it was clear that this reader was paying far too much each month for his mobile phone for the guts of seven years as a result of having a broadband add that he clearly did no know anything about. Even if that was costing him an addition €600 a year, it means he paid more than €4,000 to the company for a service he was almost certainly not using.

The second thing is that when he contacted the company to cancel his phone service, it decided not to cancel his broadband service. Would it have been too much to ask of the company that when it received that request that it may have cause the alarm bells to ring internally and someone could have checked to see if he also wanted to cancel the broadband add-on? Surely that would have been a common sense question that someone might have thought to ask?

And then finally, when it became clear there was an issue with the account, could someone in Three Mobile not have taken one look at our reader’s issue, realised instantly what the problem was and then resolved it with a simple phone call or an email to our reader? That would have save him considerable heartache and stress and meant that he did not receive threatening letters that prompted him to write to us?

All it takes is more and better communication and surely that is not too much to expect from a, you know, communications company.