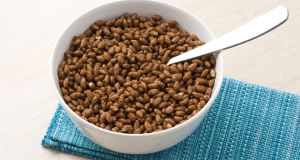 Sugar levels in some of the most popular children’s breakfast cereals on the market are to be reduced by up to 40 per cent as Kellogg’s moves to address mounting concerns over childhood obesity and sugar consumption.

The three cereals to be targeted in the first wave of the firm’s campaign Better Starts, which is to be rolled out across Ireland and Britain from next month, are Coco Pops, Rice Krispies and Rice Krispies Multigrain Shapes.

The sugar level in Coco Pops will fall by 40 per cent (from 30g per 100g to 17g) with the new formulation appearing in supermarkets from next summer. The company earlier this year cut the amount of sugar in the product by 14 per cent.

The Republic is the world’s fourth-largest consumer of sugar with people consuming an average of 24 teaspoons of it a day, most of it hidden in food.

The company’s food developers had explored different ways of 'using flavours and grains to maintain taste while reducing sugar, without using artificial sweeteners'

The move by Kellogg’s comes just weeks after Minister for Finance Paschal Donohoe announced details of a sugar tax aimed at soft drinks, which is to be introduced next year.

Kellogg’s has expressed confidence that child consumers will not turn their noses up at the changed products, which a spokeswoman said were 10 years in planning.

She declined to detail the precise make-up of the new formula, saying it was “secret” but said the company’s food developers had explored different ways of “using flavours and grains to maintain taste while reducing sugar, without using artificial sweeteners”.

On top of the sugar reduction programme targeted at children’s cereals, the company is also further reducing the salt levels found in them. From the beginning of next year the salt in Kellogg’s Rice Krispies will fall 10 per cent, and in Rice Krispies Multi-grain Shapes by 50 per cent.

The company is also trying to capitalise on a trend among adults to eat healthier food with a new line of plant-based cereals to be launched in the new year, including low-sugar, organic and vegan options.

“We know we have a responsibility to continuously improve the nutrition of our food,” said Jim McNeill, managing director of Kellogg’s Irish division. “We recognise, based on dietary survey data, that people are eating too much sugar throughout the day and that people need more options, such as organic and vegan.”