Irish electricity bills rated as fourth most expensive in EU 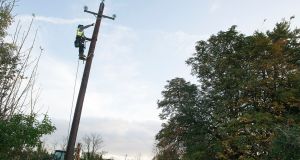 When taxes are excluded the Republic is the second most expensive place for domestic electricity in the EU. File photograph: Dave Meehan/The Irish Times

Irish electricity bills are the fourth most expensive in the European Union and 13 per cent higher than the EU average according to new figures from Eurostat.

Only Denmark, Germany and Belgium have higher electricity prices than the Republic while the picture painted by the EU-wide statistics office looks even worse for Irish consumers when VAT and other taxes are removed from its calculations.

Excluding taxes the Republic climbs two places in the league and becomes the second most expensive place for domestic electricity in the EU.

All told there are nine electricity suppliers in the Irish market but consumers do not seem to be benefitting from this high level of competition and in recent weeks, six of the nine suppliers have announced price hikes.

Increases from Bord Gáis Energy and SSE Airtricity took effect on November 1st, increases from Energia, Pinergy and PrePayPower will take effect on December 1st and Electric Ireland’s will come in on February 1st.

“It’s very disappointing to see that Ireland is the fourth most expensive country in the EU for electricity – and the second most expensive when taxes are removed,” said Mark Whelan of price comparison website Bonkers.ie.

“Consumers should take today’s news as a stark reminder of the importance of regularly switching providers to ensure they are on the cheapest deal available at all times,” he added.

He pointed out that most suppliers are offering substantial discounts and cashback incentives to new customers who switch, and there is more than €150 to be saved on average by doing so.