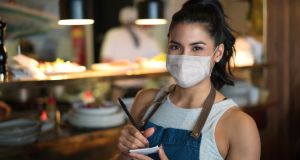 The HSE received an average of 48 reports a month concerning food establishments in March, April, May and June. Photograph: iStock

Members of the public have made hundreds of reports over possible breaches of Covid-19 rules in food outlets, new figures show.

From mid-March to June 29th Government restrictions precluded food premises from providing eating-in or dining facilities, with many businesses instead turning to takeaway and other offerings as a way of generating income.

The figures, released under the Freedom of Information Act, show the HSE received an average of 48 reports a month concerning food establishments in March, April, May and June. The figure jumped to 138 reports in July when restaurants could provide dining facilities in line with social distancing rules.

Responding to the figures, the Restaurants Association of Ireland said businesses should not have to bear sole responsibility for policing diners.

It said restrictions have changed and evolved since March and it is not surprising that there has been an increase in the number of queries to the HSE.

“As restauranteurs implement new restrictions they are simultaneously having to educate staff but also customers and patrons of same,” added the association’s chief executive, Adrian Cummins. “It seems Government or the applicable authority could also do some work to educate the public.”

Mr Cummins said an unfair public health role was being placed on restaurants and their staff.

“Restaurants have always adhered to health and safety, food safety, and public safety; however, it is unfair that as a sector we are increasingly being tasked as gatekeepers of public health.

“Our members have reported being told by customers that they were the first people to inform travellers and diners of their obligations regarding; social distancing in public places, applicable travel quarantine, restrictions on events and opening hours, restrictions on alcohol sales and use of masks.

“Businesses cannot be expected to have sole responsibility of informing and policing the actions of diners when it comes to public health.”

The highest number of reports concerned outlets in Dublin where 76 contacts/queries were made with the HSE. Cork had the next highest at 32, although most of these –18 – were made in March, followed by Wexford with 28, Limerick (20) and Galway (19).

On a provincial level, Leinster accounted for 182 complaints, Munster for 72 and Connacht for 47 while food outlets in Donegal, Monaghan and Cavan were the subject of a total of 25 reports.

“These contacts/queries were all reviewed within 24 hours of receipt and either brought to the attention of the business operator for attention/action or where appropriate were referred to other agencies/inspectorates or regulatory bodies,” the HSE said.