Q&A: The Temporary Wage Subsidy Scheme is ending. This is what’s replacing it 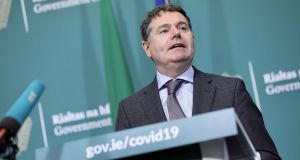 The Minister for Finance Paschal Donohoe said the new scheme aims to save jobs for longer. Photograph: Julian Behal

1. What is the Employment Wage Subsidy Scheme (EWSS)?

It is the continuation of Government efforts to prop up businesses and support employees hit by the coronavirus pandemic. It is replacing the Temporary Wage Subsidy Scheme (TWSS).

2. Why not just carry on with what they were doing?

Cost. The general view among business and industry is that the Government has done a pretty good job, but it has come at a mind-boggling expense to the exchequer – €2.7 billion since the end of March to support more than 62,000 employers and 600,000 employees. The economy has partially reopened since the onset of the pandemic and supports need to be adjusted.

3. When does it start and for how long will it run?

That’s actually a key point in all of this – the scheme gives employers and businesses some medium-term certainty, with supports now in place until the end of next March. It has already been running in tandem with the TWSS but the latter will disappear from next week.

4. Do employers have to sign up or do they automatically get switched over?

Employers must register for the new scheme. On RTÉ Radio 1’s Morning Ireland, Minister for Finance Paschal Donohoe explained that this was because it is “broader and it has different rates with the objective of saving jobs for longer”. Opting out and in again will be dealt with on a case-by-case basis, but such fluctuation is not expected to be common.

5. So what are the different rates?

6. What is this all going to cost?

The Department of Finance estimates that the new scheme will cost a further €2.25 billion. When you add that to the €2.7 billion already spent, the State will have supported businesses and workers to the tune of almost €5 billion over the first year of the pandemic.

One of the big concerns is that companies will have to show they are tax compliant by way of having a tax clearance certificate in order to join the scheme. This will be new to some businesses. At present, certificates are only necessary for those applying for certain licences or grants. Mr Donohoe said many employers have already applied and that the certificates are necessary because of the sheer amount of money being pumped into the scheme.

8. Any other conditions for eligibility?

Employers have to demonstrate that their business is expected to experience a 30 per cent reduction in turnover or orders between July 1st and the end of the year when compared to 2019 and looking at the period as a whole rather than on a monthly basis. This must also be linked directly to the effects of Covid-19.

Well apart from a substantial period of certainty, the new scheme will cover all employees, even new ones. That was not the case before. There is also an assumed incentive for businesses to offer additional hours to part-time staff in order to make them eligible for the subsidy. The scheme maintains a reduced PRSI rate of 0.5 per cent. According to the Department of Finance, this, combined with the €203 subsidy, means that up to 25 per cent of the employee cost is subsidised.

10. So that’s it – some tinkering but everyone is happy?

Of course not. There are several concerns among employers, despite the certainty that comes with an extension of supports into next spring. Two or three stand out.

Ibec has concerns about the need for participants to demonstrate they are operating at a 30 per cent decline in turnover. For the employers’ group, this is too blunt; it believes many businesses may fluctuate above the fixed 70 per cent threshold, and argues the case for a scaled or tiered approach instead.

Both Ibec and small businesses’ group Isme have flagged potential problems with a lag in support payments, possibly of up to six weeks. Fergal O’Brien, Ibec’s director of policy, said that whereas before businesses reported their financial circumstances on a weekly basis, this would now be monthly, meaning a possible delay in payments that would affect cashflow.

Isme chief executive Neil McDonnell also warned of “inevitable” job losses in some sectors as a result of the cut in subsidies. Donohoe said he did not envisage redundancies or pay cuts.