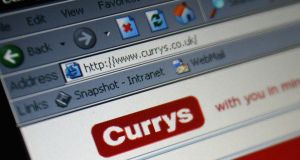 Currys’ fridge-freezer was bought in September 2018 and it broke down last spring while still under its two-year warranty. Photograph: Chris Jackson/Getty Images

Every single day Pricewatch hears stories of incompetence and intransigence and what sometimes seems like a wilful disregard for customer care on the part of companies, big and small. The tales of woe can be wearying and baffling and we frequently find ourselves thinking how much easier it would be for companies to do the right thing rather than do the wrong one. They could so easily save themselves time, effort and even money while not alienating their customers and potential customers by being sound.

We have a story that neatly illustrates that today and it comes from a reader, Fionnuala, who mailed us to highlight a “really appalling experience my elderly parents have had with a Hisense fridge-freezer that they bought online from Currys”.

The fridge-freezer was bought in September 2018 and it broke down last spring (in late March or early April) while still under its two-year warranty. It was as the lockdown was starting so the timing could scarcely have been much worse.

“After many, many phone calls to both Currys and Hisense, [the manufacturer] finally sent out an engineer to examine it who said that it was beyond repair, that they were entitled to a full replacement and that Hisense would be in touch within two weeks to confirm this,” our reader writes.

“Given that it was in the middle of a pandemic, my parents weren’t too alarmed when this didn’t happen. But after many more weeks of waiting, I got in touch with Hisense on their behalf. After many phone calls, emails and yet more delays, the company finally confirmed that they were entitled to a replacement model or alternatively, given the inconvenience they’d suffered, to a model costing as much as an additional 15 per cent of what they’d spent on the original fridge-freezer.”

So far so good.

The company told her to contact Currys directly as regards arranging delivery of the replacement fridge-freezer.

“After many, many, many phone calls to Currys where I was either cut off mid-conversation or sent to the wrong department, some weeks ago I finally got in touch with a very helpful guy who confirmed that the particular model we wanted to replace was out of stock and that he couldn’t find out if it would be restocked. He carefully logged all the details of the case and told me to keep an eye on the website over the coming weeks. After requesting a stock update via their website, I subsequently got an automated email last week confirming that this particular model would not come back into stock.”

This lead on to the big problem. Her parents chose this particular model for its particular dimensions as it needs to fit into a recessed space in their kitchen. “So we scoured Currys’ website for an alternative and finally found another model with very similar dimensions. Priced at €1,199, it meant that my parents would have to pay an additional sum of €107.65, which they were content to do (€949 + 15% = €1091.35) as at this point they are just desperate to have a functioning fridge-freezer again, especially given what’s going on as regards the pandemic/cocooning.”

This is where it gets ridiculous.

“I spent yet another hugely frustrating morning yesterday trying to access Currys customer care service to arrange delivery of this replacement fridge freezer, during which time I was yet again cut off repeatedly, sent to the wrong departments and left listening to recorded messages while I waited and waited,” Fionnuala writes.

“When I finally got to speak to someone, I was told – unbelievably – that my parents would not be allowed to choose this replacement model as it cost more than the cost of the original fridge-freezer + 15%. I explained that my parents were happy to pay the additional sum of €107.65 as they just wanted to get a model that would fit the space but I was again told that this was not possible. The only other alternative I was offered was a partial refund equivalent to the ‘depreciated value’ of the original fridge-freezer now that it was a year and a half old, which I told them was completely unacceptable.”

When she asked to speak to a manager she was told one would phone by 6pm. When the call didn’t happen she spent “another fruitless couple of hours trying to speak to someone at Currys who will sort this problem out. After more than an hour of trying to get through to the correct department followed by yet another hour listening to various recorded messages, I was yet again cut off.”

She did finally get a call from a manager who confirmed that Currys “wouldn’t facilitate my parents paying the additional sum of €107.65 to get the model that they want. He said that they either had to buy a model within the defined price bracket (the original price of the fridge plus 15%) or accept a depreciated refund of €420 based on the fact that the fridge was a year and a half old.

“When I asked him if he thought that it was a fair way to treat an elderly couple in the middle of a pandemic, he told me (I had to laugh) that I was being emotive in using that word and it was simply company policy. I was astonished by how offhand and unhelpful he was. Such an utterly lousy, contemptuous attitude to their customers.”

We got in touch with Curry’s and received the following statement:

“ We are truly sorry that [our reader] and her parents didn’t receive the standard of customer service that we normally expect of ourselves. We have apologised to our customer and have agreed to exchange the faulty fridge/freezer for a superior product at no extra cost. Our customer is happy with this resolution.”