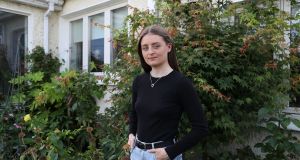 Dublin teenager Molly Ryan is still suffering coronavirus after-effects: ‘I had bad heart pain and the fever was meant to go after five days, but it just stayed.’ Photograph: Nick Bradshaw

Like many young people Molly Ryan did not think Covid-19 could happen to her.

She was on a gap year before entering UCD to study commerce and working in a nursing home near her house in Blackrock, Co Dublin, when she developed a temperature.

Twenty weeks, three hospitalisations and eight weeks of isolation later, Ryan is still suffering the after-effects of the virus.

She has a persistent temperature and a racing heart. She has to use an inhaler at times and suffers from fatigue, yet she says her health is better than it was.

It took two weeks for her to be diagnosed with Covid-19, by which time it was a foregone conclusion that she had the illness.

She was in hospital for two weeks in April. “I had bad heart pain and the fever was meant to go after five days, but it just stayed. I knew a new symptom would come and checked the symptoms off the list.

“During the night, I got nauseous symptoms, I was getting sick the whole night. Being in hospital in a Covid-positive ward, just hearing everyone coughing during the night, it was really hard. It was a very difficult time.”

A false positive test in July led to another two weeks of isolation. “It was hard to see all my friends when lockdown lifted and they went out and I was still stuck in my bed,” she says.

“I have heard a few people say that they are not back to themselves. I am not back to myself.”

Ryan has been frank with her friends about the potential impact of the illness. “When I met up with my friends, I wasn’t scared to tell them stuff.”

Her doctor, Prof Paddy Mallon, a consultant in infectious diseases in St Vincent’s hospital, says the virus is “incredibly complex” in its impact on patients.

He has noticed three patterns among young people.

Some get pneumonia-like symptoms, which can lead to a chronic cough.

Secondly, many end up with racing heart rates, a result of damage to the heart. “This is not an organ you want to get damaged for a young person. We don’t know the long-term consequences for this.”

“Any young person who thinks there are no consequences from this virus needs to think again,” he warns.

“It maybe won’t kill you, it may not even put you in hospital, but there is a chance this virus can have a severe and lasting impact especially on our young people.

“The last thing you want to do is contract this virus and end up having your fitness impacted to such an extend that you lose months.”