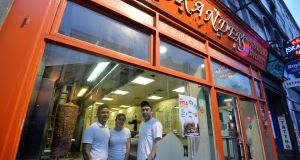 One of Dublin’s original kebab shops is set to close its doors later this month for a major refurbishment and relaunch following nearly 28 years of providing late-night snacks to hungry city-centre revellers.

Iskander’s Kebab House on Dame Street, which has been in operation since 1992, will close on January 19th to allow for a complete renovation of the premises. The late-night food takeaway was recently bought by the Aydin family who say they are planning to reopen in mid-February as a more upmarket restaurant.

Ali Aydin, whose father started working at Iskander’s in 2000 shortly after the family moved to Ireland from Turkey, says the kebab shop was one of the first of its kind in the city centre and introduced passersby to the tastes of North Africa and the Middle East.

“Being open till half five in the morning it started a trend of eating a kebab after a night out on the town with many other shops following in its footsteps,” said Mr Aydin. “It paved the way for the terms ‘shawarma’ and ‘doner kebab’ being widely known in the Dublin region.”

One Iskander’s staff member, who has worked at the shop for 24 years, recalled to Mr Aydin how hundreds of people would queue outside the shop in the early hours of the morning eagerly awaiting their kebab. “He said they were pushing out 1,600 orders a day. People were intrigued and trying to find out what this new food was. It was something they’d never seen before.”

It’s believed the original owner was Algerian but the shop was subsequently sold on to an Irish owner. In the late 1990s other kebab shops started to spring up around the city centre including the popular Zaytoon chain which opened its first Café Topolis premises in 1996.

Mr Aydin says he enjoyed working behind the till while at college and that the late-night antics among customers “aren’t as bad as people make them out to be”. “Nearly all kebab shops have security after 1am but I don’t see the need for it because there aren’t as many problems as there used to be. We used to hear stories of fights between customers but we don’t see that anymore. People seem more chilled.”

The Aydin family had recently noticed a change in customer preferences with more people choosing to eat their fare for lunch or dinner rather than after a night out. “We’ve been seeing less people coming in at 4am and more families during the day. Other places are renovating and placing more focus on the environment where people eat.”

Jamal (Jimmy) Aydin, Ali’s uncle, said the family had spent the past three years making plans on how they could purchase and refurbish the shop.

“We want to have a more modern concept, the place needs updating. We thought it would be good to tell people in advance because Iskander’s has been open for such a long time,” he said. “We didn’t want to just shut the doors.”

He said the new restaurant will no longer be called Iskander’s.