British Airways: ‘I was left stranded and abandoned’ 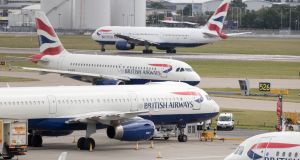 ‘BA made a huge error in not issuing our ticket, failed to get us to our destination, and left us with no means of contacting them to correct this.’ Photograph: Steve Parsons/PA Wire

We frequently devote space on this page to issues readers have with both Ryanair and Aer Lingus but in recent weeks two readers called Ronan made contact to highlight serious customer service shortcomings on the part of British Airways that almost make the Irish-based airlines seem like paragons of virtue.

“I’ll get to the point,” started the mail from the first Ronan. “Over a week ago I landed in Dublin on BA828. The flight was delayed about three hours and my bag didn’t make it to Dublin. I’m only mentioning the delay in case it could be related to the losing of my bag. I filed a missing bag report with Menzies Aviation and left the airport after hours of waiting by the baggage belt.”

Ronan waited a couple of days after getting home with no contact from BA or Menzies. “Menzies turned out to be virtually impossible to contact but after multiple days I opened a line of communication with them after my mother got through on the phone. They told me the problem was with BA,” he says.

On a personal level I’m running out of the will to contact BA again. I guess that’s their agenda

“Yesterday after four phone calls over two full hours, mostly on hold, a person at BA opened a case and gave me a reference number but nothing has developed since.”

The mail said that “on a personal level I’m running out of the will to contact BA again. I guess that’s their agenda. I’m in Ireland to get married and to have a fishing holiday. Lots of wedding clothing is in my bag, all my son and daughter’s clothes, expensive gifts and all my fishing gear, some of which is irreplaceable for sentimental reasons. I’m quite distressed. This issue has ruined and consumed my holiday so far.”

Then we got a statement.

“Every day we take great pride in carrying thousands of bags safely and speedily to their final destination where the vast majority arrive on time. Our teams are returning the bags to the customer and we’re in contact with him to apologise,” it said.

Then we got a mail from Ronan.

“The bag has been found,” it started. “I got the info on the 12th that the bag arrived in Dublin on the 10th; I arrived on the 8th. That info was then changed saying the bag never left Heathrow. This morning [last Monday, August 19th] they once again confirmed that the bag made it to Dublin on the 10th. A few hours later it was found. Not sure who lost the bag! Flippin’ annoying that it was sitting there for nine days but happy to have it back . . . well almost, it’s in the courier van.”

In desperation about the fact that I am getting nowhere with them, I am reaching out to you

Then there was the second Ronan’s story, one which is arguably even worse.

“I am in the middle of a nightmarish back-and-forth – or not, as the case may be – with British Airways arising from a travel disaster during my recent honeymoon,” he said. “In desperation about the fact that I am getting nowhere with them, I am reaching out to you.”

On Monday, June 24th Ronan and his wife set out on their honeymoon to Sardinia. They have an 18-month child and he was left with family for the week so the newly weds’ time together was tight.

They booked a one-way ticket with British Airways to Olbia in Sardinia from Dublin via Heathrow.

The plan was to travel home via Rome and the homeward flights were booked with Aer Lingus separately. The Heathrow layover was tight he says “but as it was all on the one BA ticket we were confident all would be okay”.

Fog in Dublin delayed their takeoff and they missed their flight to Sardinia.

“We were advised to go to the connections desk where the BA rep informed us that we had been rerouted to Olbia via Rome later that day. We were given boarding passes for the BA flight to Rome at 3pm, and told to collect passes for an onward flight to Olbia from Air Italia on arrival. They told us our bags were checked through to Olbia and were given a flight itinerary with booking confirmations. While frustrated at the delay we were happy enough that we would get to our destination that night.”

They got to Rome and were directed to the boarding gate to collect their boarding passes for the onward flight. “When the gate opened we presented the itinerary BA had given us but were informed by staff that BA had not issued the tickets and that we were not booked onto their flight.” They protested but the Italian airline was adamant the couple could not travel.

“We inquired about our luggage but they could not assist. They advised us to take this up with BA. As I sought to contact BA on the phone, my wife fortunately located our luggage on the baggage carousel from the Heathrow flight. I was unable to speak to BA customer relations as the lines closed at 8pm.

“We located the BA ticketing agent in Rome (ARE – handling agent), and all they could do was confirm that BA had not issued our ticket and gave us further telephone numbers to contact. Despite two further conversations with BA reps on the phone that night, none said they could assist us as it was a matter for customer relations.”

They were left with no option but to check in to an airport hotel at their own expense and buy two individual tickets for an onward flight to Olbia the next morning.

It is now over a month since the incident, and for all BA care I could still be in Rome airport

“Over the next few days I made repeated attempts to contact BA customer relations but to no avail. They said they would send me an email link to upload necessary receipts for reimbursement which I have done. Since then I have repeatedly spoken to BA reps, none of whom have dealt with the issue of BA’s failure to issue the onward tickets from Rome to Olbia. At one stage I thought I was making progress with an agent but then I received an email saying my request for compensation had been denied because the Dublin flight was delayed by fog, but this was not the issue I was complaining about.”

Ronan says he has been in touch with BA “countless times since by phone and email and am getting nowhere. I have even reached out to their CEO’s office, but all I get is an acknowledgement. It is now over a month since the incident, and for all BA care I could still be in Rome airport. I was left stranded and abandoned by them and any efforts to contact them since have come to naught. I remain significantly out of pocket for the night in the hotel and the flights from Rome to Olbia that I had to purchase myself. We also lost a full day of our short honeymoon.”

He says he fully understands that delays happen “and we totally accepted the rerouting. But the fact is that BA then made a huge error in not issuing our ticket, failed to get us to our destination, and left us with no means of contacting them to correct this. To make matters even worse, they haven’t once engaged with the substance of this issue in the intervening month. I have tried daily phone calls, emails, contacting their CEO’s office but have had little or no response.”

We had more luck. We got in touch with the airline and it said: “We are sorry for the upset that our error has caused and the disruption to our passengers’ honeymoon. Our senior customer service team is in direct contact with the customer to resolve this matter.”

Ronan subsequently got in touch to say the airline had agreed to cover the out-of-pocket expenses incurred and to refund the cost of the original flights with a little bit added on top of that.