So-called influencers: how much influence do they actually have? 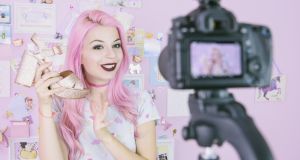 Is the low value people in Ireland appear to place on celebrities endorsing particular products a sign of ‘influencer fatigue’. Photograph: iStock

Earlier this month, Pricewatch found itself at a swish event to promote a brand of whiskey. While we were standing at the entrance swirling a spirit around a glass, a small man in a big baseball cap approached the gatekeepers and asked for one of the badges that had been given to attendees to mark their presence.

The small badge was nice enough but had little or no value. Even so the man seemed very keen to get one and explained to the organisers that he had “over 100,000 followers on Instagram” and if was given the badge he would be able to “make it worth your while”.

Minutes later, badge proudly attached to his lapel, he was back looking for a free drink, again promising to take a pic of himself with the whiskey and share it with his many, many followers.

The overheard exchange piqued our interest, firstly for the shamelessness of the man’s transactional view of the world – “give me something for free and I will do something nice for you” – and also because it worked, or at least the organisers made him believe his ruse had worked.

So Pricewatch followed him into the venue and struck up a conversation. He talked in a most enthusiastic fashion about the importance of social media influencers – influencers like himself – to brands such as the one behind the event. And he outlined a new world order in which the media and the message would be shaped by citizen journalism.

Pricewatch, for its part, did its bit to defend old-school journalism but our influencer friend was insistent that the end was nigh for the “mainstream media” and it was his time now. He used the phrase “fake news” more than once.

The conversation ran its short course, after which we went our separate ways. It was only the following day that we decided to look this individual up on his social media platform of choice and saw that he had just over 100 followers, or 99,900 fewer than he had claimed as he went in search of his free stuff.

And he was the one talking about fake news?

While he massively inflated his follower base to get something of little or no monetary value for nothing, he was closer to the truth when discussing the rise of the influencer and the importance of social-media platforms in shaping our world.

“When the first TikTok star is elected president, I hope she will save some room in her cabinet for older and more conventional bureaucrats, even if they don’t have millions of followers, great hair or amazing dance moves,” wrote Kevin Roose in the New York Times earlier this month.

“I say ‘when’ not ‘if,’ ” he continued “because I just spent three days at VidCon, the annual social-media convention in Anaheim, hanging out with a few thousand current and future internet celebrities. And it’s increasingly obvious to me that the teenagers and 20-somethings who have mastered these platforms and who are often dismissed as shallow, preening narcissists by adults who don’t know any better are going to dominate not just internet culture or the entertainment industry but society as a whole.”

Although his view from Anaheim may be incomprehensible to someone who does not know what TikTok is, the role social-media influencers play in promoting products and shaping views matters.

That does not mean influencers are universally loved. Joe Nicchi runs an ice-cream truck in Los Angeles and went viral earlier this month when he announced to the world that he was sick of being asked by “influencers” for free ice cream.

He posted a sign at his truck that said “influencers pay double” and wrote an Instagram post warning that he would “never give you a free ice cream in exchange for a post”. The image, tagged #InfluencersAreGross, spread around the world faster than a 99 can melt.

“We’re the anti-influencer influencers,” he said.” It’s weird . . . but I think it’s really fun. I hope it inspires small businesses to hold their own and tell people to f*** off.”

His post had echoes of something that happened much closer to home last year when Irish cafe and hotel owner Paul Stenson effectively told such folk to f*** off.

Stenson, who owns the White Moose Cafe and Charleville Lodge in Dublin’s Phibsborough had form. He has made headlines with a ban on vegans and a demand that coeliacs show a doctor’s cert and once suggested that breastfeeding mothers might be charged corkage.

Much of what he says – we suspect – is said with his tongue firmly in his cheek.

He may not have been joking last year when he banned bloggers and mocked one who had clearly not done her homework when she asked for free accommodation in his hotel in return for posts across several social-media channels.

“Thank you for your email looking for free accommodation in return for exposure. It takes a lot of balls to send an email like that, if not much self-respect and dignity,” he wrote in an open letter published on Facebook.

He was making a valid point in a typically over-the-top fashion.

A new report on businesses and social media contains an interesting nugget about the influence influencers have on consumers.

The admittedly self-serving study by a provider of “social-media marketing and analytics solutions” called Sprout Social is called From Conversation to Connection: How Brands Can Turn Likes into Action, and it highlights the importance of online interactions for brands.

It says establishing “meaningful connections with customers on social media” can increase both revenue and traffic, with 76 per cent of consumers here liking or following at least one brand on social media, and brands that entertain being more likely to engage Irish consumers than brands that offer discounts or hire influencers.

However, only 16 per cent of consumers said they would be encouraged to engage with a brand’s content if it included influencers or celebrities, something that suggests that what Irish consumers want more than the promise of cheap stuff or endorsements is entertaining interactions from real people.

Gerard Murnaghan of Sprout Social says the low value people in Ireland appear to place on celebrities endorsing particular products could a sign of “influencer fatigue”, and he cites the example of a brand recruiting multiple micro-influencers and paying them to “copy and paste the same text about a particular product over a short space of time. I think Irish people look at that cynically.”

They do not, however, look at the social space like that. He says that because of the multiple online channels that now exist, consumers have an expectation that concerns will be dealt with “in minutes, not hours, days or weeks”.

Murnaghan cautions brands to bear in mind that by failing to deal with queries fast, they can quickly fall victim to the “snowball affect” and see complaints multiple rapidly in the online space.

“Just because you have an online presence doesn’t mean problems will be resolved but those businesses who can resolve online fast can turn dissatisfied customers into delighted ones and advocates of a brand rather than critics.”

He adds that on social media customers are with brands all the time, “and that means brands need to properly resource their online engagement and monitoring. It takes a long time to build a strong connection with consumers on social, but sometimes only one misstep to lose their trust.”

That is certainly true. Take KLM. A couple of weeks ago it attracted the rage of millions of people across the world for telling a Twitter user it reserved the right to ask breastfeeding mothers to shroud themselves and their infant children in blankets to protect the easily offended.

And then a tweet from its Indian division inexplicably raised the spectre of crashes and told passengers they were most likely to die in the middle seats of planes and more likely to survive if they were seated towards the back.

After 12 torrid hours the tweet was deleted, after which the company “apologised “for any distress the tweet may have caused” and said it would be “reviewing our Twitter protocol to better ensure appropriate content”.

That is probably for the best.