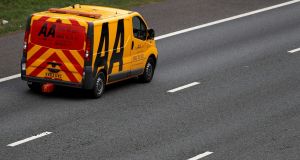 An AA spokesman said: ‘If you have a second car in the household advising of this can help lower your quote.’ Photograph: Reuters

We recently got an interesting sequence of mails from Cork-based reader Piaras Mac Éinrí.

“My AA annual quote has just arrived,” the first mail started. “Even by the standards of exorbitant Irish insurance rates it is something else – an increase from €594 to €855, which is a whopping 42 per cent for an eight-year-old car, full no-claims bonus and clean record. As a cyclist I don’t even use the damned thing except for parental visits, where Irish transport systems are all based on a Dublin-centric system, which is useless if you’re travelling from the south to the west.”

The mail went on to say that although he accepted that it was “probably worse for younger motorists” it was still “absolutely exorbitant” and he would be shopping around.

We offered to find out more at that point, but he said he would do his own research and get back to us. And so he did.

A couple of weeks passed and Piaras send us another mail. “I consulted a lot of friends via Facebook and took advice,” the mail began. All those who he consulted felt the increase that the AA was trying to impose was “outrageous”.

“Today I went online again, to AA, and got a quotation – of €523.88, compared to their renewal notice of €855 – a decrease of 39 per cent on the first quote and actually lower than last year. Since the quotation was for Aviva, I then went directly to Aviva online and got a quotation from them for €433! I accept that the nature and extent of the cover offered is not identical but it’s still comprehensive cover.”

He says the whole incident “has completely destroyed any trust I had in AA as a broker”.

We got in touch with the company to see what it had to say. AA spokesman Barry Aldworth sent us a very detailed response.

“Having looked into this there are a few differences between the two quotes, which I feel need to be outlined and help explain the difference between the two prices,” he said. “To start with, the renewal quote of €855.41 (I’ll call this Quote A) is based on a Standard AA Car Insurance policy whereas the online quote (Quote B) of €523.88 was for a Value AA Car Insurance policy which offers a lower price point but a lesser level of cover than our standard policy would.”

He said that on Quote A, “the customer would have received full no-claims discount protection as part of his cover. However, Quote B included no such protection. Also, when completing Quote B online, the customer advised that they had a no-claims history of nine years, whereas Quote A was based on a no-claims history of five years based on the information we had about this customer when generating their renewal quote.”

He said the Quote B price of €523.88 also listed that the customer’s household had access to a second car, where Quote A did not. “It’s something which some people do not realise, but when getting a quote, if you have a second car in the household, advising of this can help lower your quote.

“Finally, Quote A for €855.41 was generated on the basis of an annual mileage of 11,999km. However, in Quote B the customer stated that their mileage was significantly lower at 6,214km per annum. This lower mileage would also have contributed to the difference between the two quotes.”

He says that our reader acknowledges there is a difference in the level of cover provided “and this would be reflected in his quote”.