Disputes between landlords and tenants up 10% last year

Almost half of efforts to terminate lettings were deemed invalid, says tenancies board 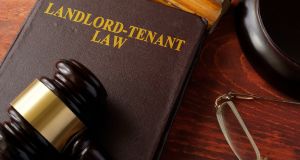 The Residential Tenancies Board says rent arrears, the validity of terminations and retention of deposits, in that order, made up the majority of disputes

Disputes between landlords and tenants rose by 10 per cent last year while almost half of efforts to terminate lettings were deemed invalid, according to the Residential Tenancies Board (RTB).

In one case, a tenant deliberately damaged water pipes in order to flood the bathroom and kitchen of a property, the body that oversees the private rental sector said.

Demand for its services maintained a steady increase in 2018 with general contacts rising 6 per cent.

“Every year, for the last five years, demand for RTB Services has continued to grow, reflecting the continued pressures people are feeling in the rental market,” said director Rosalind Carrol at the launch of its annual report on Wednesday.

Disputes between landlord and tenant are a key component of the RTB’s workload with 6,398 resolution applications lodged in 2018.

Rent arrears, the validity of terminations and retention of deposits, in that order, made up the majority of disputes.

It said 42 per cent of all notices of termination submitted by landlords were deemed to be invalid while a total of €2.2 million in rent arrears was awarded, averaging €4,039 per landlord.

In more than 80 per cent of cases dealing with deposits, the money was either fully or partially refunded to the tenant.

Case studies contained in the report outlined the types of incidents that come to its attention.

In one, €11,000 in damages was awarded to a landlord due to damage caused to a property, including the deliberate disconnection of and damage to pipes and plumbing that caused flooding in the bathroom and kitchen.

A case adjudicated in favour of the tenant saw almost €4,000 awarded in overpaid rent resulting from the tenant being threatened with the sale of property if they did not agree to an illegal increase from €1,200 per month to €1,500.

This was a slight decrease on 2017, which saw a total of 339,447. The total number of private rented tenancies decreased by just under 2 per cent since 2017.