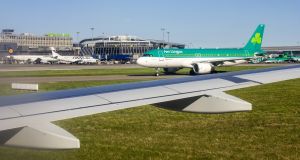 “We were consistently told by Alaska Airlines that their system does not ‘talk’ to the Aer Lingus system.”

“My husband and I are having a slight issue with Aer Lingus at the moment and getting very little satisfaction,” begins the mail from a reader called Gwen.

“However, Alaska have since located it and on Saturday it was put on an Aer Lingus flight from Seattle to Dublin (we don’t know how it got to Seattle) and the bag arrived in Dublin yesterday.”

But here’s the thing.

“Alaska Airlines then told us that we had to collect it from the airport! Now we do only live 15 minutes from Dublin Airport but it’s the principle of the whole thing that is really getting to me so I wrote to Alaska and told them that between them and Aer Lingus they were responsible for delivering the ‘delayed/lost/found’ item to our home as per their baggage policies.”

Alaska told her they would “see what they could do but we haven’t heard from them since so we contacted Aer Lingus again”.

This was their response: “Hi, Gwen. We’re sorry to hear this. As the missing baggage report was filed by Alaskan and they were the final flight which the bag was due to travel on, they manage the tracing of the baggage and liaise with other airlines the baggage travelled on to find a match and return it to guests. We’re unable to access their system to retrieve the baggage information and would suggest you get back onto them.”

This in turn was Gwen’s response to Aer Lingus: “Well here is the problem. It is costing us every time we contact you or Alaska. How about Aer Lingus contact Alaska seeing as we booked our flight through you? The level of service has been nothing short of appalling with no one willing to take responsibility or accountability for the missing item. We have an email from Alaska specifically stating that the bag was lost by Aer Lingus and now you are telling me to contact Alaska again but apparently the bag never travelled with them. The bag is in Dublin, we live in Dublin, we booked the flight with Aer Lingus and paid Aer Lingus. What happens to the bag after that is Aer Lingus’s responsibility, whether that involves Alaska is besides the point. It is not for my husband or I to chase the bag. That is for Aer Lingus to do. Contact Alaska and get the bag delivered to us as promised in your baggage policy please. Thank you.”

Aer Lingus then replied: “We understand your frustration with this, and we will work with Alaskan to return your bag to you but as mentioned, the onus falls on the final carrier to return baggage when a report is filed with them.”

To which the reader replied: “And while I understand that, the onus should not be on the customer to liaise with the airline that Aer Lingus code share with to get our bag returned to our home address. The onus should be with Aer Lingus as that is the originating company through which we booked the flight.”

Then there was silence. “I can’t see how we, the customer, should have to ring a baggage desk in San Diego to get our bag in Dublin Airport, which we haven’t seen for over three weeks, delivered to us, when the original flight/service was fully booked with and paid for through Aer Lingus.

“My husband followed the correct procedures in San Diego with Alaska Airlines when the luggage did not arrive. We contacted Alaska Airlines every day while we were in San Diego but they were unable to locate the bag. Alaska Airlines would not take an international contact number to make contact with us if the bag was found so we had to give a contact number belonging to my relative. We were consistently told by Alaska Airlines that their system does not ‘talk’ to the Aer Lingus system and that my husband should’ve collected the bag at SFO and rechecked it for onward travel to San Diego. We knew this was not the case but it did not stop them telling us this on numerous occasions.”

Alaska Airlines also mailed our reader to point out that it was an Aer Lingus delay that caused the bag to be lost in the first instance.

Surely the Irish airline could have done more to help this person out?

We got in touch. Not long after that the bag was delivered to Gwen. Then we got the below statement from the airline.

“Despite an early arrival into San Francisco airport on 27th December, unfortunately the guest’s bag did not make its connecting flight on to San Diego,” the statement said. “As is standard international airline procedure, it is the final carrier’s responsibility to reunite the guest with a delayed bag, which in this instance was Alaskan Airlines who returned the bag to Dublin on 19th January.

“Upon on arrival into Dublin a customs from was required in order to return the bag. Contact was made with the guest on 22nd January and the bag reunited with the guest that evening. We appreciate that this is not the level of service our guests expect from us and our partner airlines and we apologise for the inconvenience caused to this particular guest.”