Which are the 20 best cities to cycle in? Hint: Dublin is no longer one of them 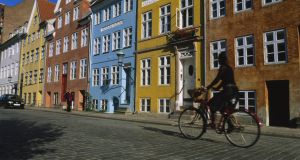 Copenhagen, Denmark has been named the most bike-friendly city in the world for the second year running. Photograph: Getty Images

There is something thrilling about using a bicycle to explore a new city. Street life seems more vibrant as you whizz past the crowds and down side streets that are off the usual bus routes.

Restaurants smells tickle your senses before you can see them and stopping at an alluring street-side bar is a simply matter of finding a lamppost to tether your mount. City residents all over the world are rediscovering the benefits of cycling and cities are responding by building the infrastructure.

Or at least some of them are. In other cities, taking to the saddle as a resident or tourist might be thrilling but there’s an extra dash of fear as you dodge gridlock, potholes and unfinished tramlines … let’s not name names on that point. Actually let’s name names, because according to a bi-annual listing of the most bicycle-friendly cities, Dublin nolonger makes the grade.

A ranking looks at 140 cities around the world. Back in 2011, the first year of the report by Copenhagen design company Copenhagenzie, Dublin was ranked ninth. Admittedly this was a surprise to many in the capital, with then Lord Mayor Andrew Montague describing the result as “astonishing”.

But back then Dublin was experiencing a “grand rebound” and was awarded 12 bonus points for “particularly impressive efforts”. It achieved a top 10 spot due to “ballsy political decision-making” according to the authors of the index. They cited the “wildly successful bike share programme, visionary politicians who implemented bike lanes and 30km/hr zones and a citizenry who have merely shrugged and gotten on with it”.

The judging for the index is based on 14 parameters, including advocacy, parking facilities, infrastructure, bike share schemes, politics, social acceptance, traffic calming and perceptions of safety.

This year, the authors say Ireland has slipped out of the Top 20 because “after many years of progress, the city has stagnated and, to be honest, disappointed”. Cyclists in the capital won’t disagree, but don’t despair, there are many bicycle-friendly cities a short flight away and perfect for an autumn weekend getaway. Here are our favourites from the Top 10…

Copenhagen, Denmark
The Danish capital tops the list for the second time, which is no surprise given that many describe the city as being “built for cyclists”. It has invested $150 million in cycling infrastructure and facilities over the past decade and a third of Copenhageners commute to work by bicycle (only 9 per cent drive). As a tourist, it’s easy to rent a bike from numerous rental shops or the using the city bike scheme. There are city 350km of cycle paths in the city and many lanes are raised from the road, meaning you feel safe and separated from traffic.

Cycling Copenhagen (cycling-copenhagen.dk) offers informal, small group tours of the city hitting traditional sights, such as the mermaid and Parliament, as well as the harbor, canals, houseboats and local coffee shops. Many more are listed on visitcopenhagen.com. SAS fly daily to Copenhagen from Dublin from €80 return.

Utrecht, Netherlands
You can’t really have an article about cycling and travel without mentioning the Netherlands. But we are going to skip the Cycling Capital of the World Amsterdam (which ranked third on the index) and pedal towards one of the Netherlands’ oldest cities, Utrecht. The city was thrust into the cycling spotlight when it hosted the ‘Grand Depart’ on July 4th for the 2015 Tour de France and it beats Amsterdam into second on the index this year. The medieval centre is set out around canals with street-level and lower water-level paths where warehouses were located in the 13th century.

Cycle away from the core to experience the buzz of the largest student population in the country. Roads are being converted into canals as the city plans 33,000 bike parking spots by 2020. It already has 12,000 and pop-up parking. Use one of these to park your rental or share bike and tackle 465 steps around winding stairwells to Domtoren, the Netherlands’ highest church. Use the views to plan your cycle route around the city and make sure to include plenty of stops in the movie houses-cum-pubs and beer cafes.

Visit the VVV store on the Domplein for bicycle maps and rentals. There is a direct 30-minute train from Schiphol airport to Utrecht.

Malmö, Sweden
Malmö is up one place to rank fifth in the index. Key to this was the opening of Cykelhuset, Bicycle House, an apartment block designed from the ground up with bicycles in mind. Bicycle spaces replace car park spaces, lifts are larger to accommodate bikes and doors have been widened so that cargo bikes can fit through. Next door, the Bicycle Hotel (ohboy.se/en) provides travellers with similar accommodation where bikes are included in the price of your room. The streets show off that Malmö is Sweden’s most multicultural metropolis – 150 nationalities make up the head count. Exploring by bike is the perfect way to see the Middle Eastern street stalls, sprawling parks, Nordic architecture, Italian coffee and hipster skateboard parks. A new bike ferry between Malmö and Copenhagen means you can combine both cities with ease.

Bordeaux, France
Bordeaux rises two places to sixth this year and touring by bike is the easiest way to explore this Unesco World Heritage Site. There are about 1,500 share bikes available to visitors and over 450km of cycle paths in the greater Bordeaux area. If you are in the city for a weekend, follow one 8km route from Place Gambetta, down the Cours de l’Intendance where you can see the mascarons - sculpted stone faces above doors that are typical of 18th century architecture. Continue to the famous Grand Théâtre and take the Cours du Chapeau Rouge down to the renovated quays. Enjoy the banks of the Garonne from your saddle before crossing on the Chaban-Delmas lift bridge and views of Place de la Bourse and Old Bordeaux. Of course, taking your bike to tour the vineyards around Bordeaux arguably offers even more charms.

Tokyo, Japan
Okay, so it might not be a short hop away but if you find yourself in Toyko, get in the saddle. The city ranks ninth in the index and deserves a mention for the sheer number of bikes available to tourists. They are everywhere. Guided cycling tours of the city mean you can explore the sights, sounds and smells at ease – from the Tsukiji Fish Market to the Imperial Palace and Japanese Garden. It’s common to take your bike on the train around Toyko so head out of the city and climb the foothills of Mt Takao for an exciting descent to Sagamiko Lake. If you are planning more than one day by bike out of the city, rent a bike bag - rinkobukuro – along with your bike. Take off your bike wheels, pop it all in the bag and all aboard. There are numerous bike rental shops in the city as well as plenty of “Cycling Experience” listings on Airbnb.

Also worthy of a mention is Oslo, where the city centre will be closed to private cars from 2019. It ranks 19th on this year’s index.

Two €10 wines to try: a vibrant Sauvignon Blanc and a fruity Bordeaux
5