When things go wrong abroad, who do you call? 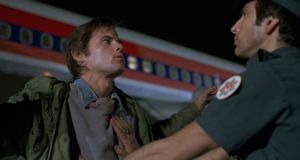 Travel can be stressful when things go wrong. Above, a scene from Midnight Express

When things go wrong abroad it is important to know how you can seek help. It can be a health issue, a death overseas, an accident, robbery or assault. It may involve a missing person, an arrest or a lost passport. In such situations, the consular services of the Department of Foreign Affairs can help.

In the event of one of these problems, an affected Irish citizen can make contact with the local Irish Embassy or honorary consul. The department can offer linguistic and cultural support on who to contact and how things are done locally, and provide details of English-speaking doctors and lawyers.

The department does not have a budget to pay for medical, legal or other expenses, which citizens must arrange themselves

Where required, it can contact family and friends on a citizen’s behalf and issue travel documents. However, the department cannot provide medical or legal advice or intervene in judicial processes. It also cannot influence the visa decisions of other countries. The department does not have a budget to pay for medical, legal or other expenses, which citizens must arrange themselves. Details of all Irish embassies and consuls are on the Travelwise app and on dfa.ie.

“A change in demographics means it is not all young people going backpacking who have problems,” says Pat Bourne, director of consular services. “Older people are being adventurous and travelling more. They are more vulnerable and can have health issues and need the consular services. Young people tend to get involved in risky behaviours and adventure sports.”

In the first half of this year, deaths abroad numbered 150, up from 127 in the same period last year. There have also being 64 victims of crime, 135 arrests of Irish citizens and 55 missing people.

There were 21 child abductions, up from nine last year – although these figures relate only to states that are not party to the Hague Convention on Child Abduction. The total number is much higher: in 2015, the last year for which full figures are available, there were 320 applications relating to child abduction, of which 177 were children brought into Ireland and 143 were children were brought out of the country.

The consular services of the Department of Foreign Affairs provide support and backing to Irish embassies, which are usually the first to have to act when major disasters occur abroad. “We try to close the loop early and get information flowing as fast as possible,” says Bourne.

One such event was the Bataclan theatre and other terrorist attacks in Paris in November 2015. The crisis team of 30 trained people was assembled in Dublin late on a Friday night in less than two hours. The 15 staff of the Embassy in Paris were also on duty all night handling calls.

They worked with two lists: people who were missing in Paris and relatives and friends looking for news. The aim was to cross everyone off the lists as news came in. Information was slow to emerge due to the multiple attacks.

“Twitter was an effective tool for getting news out and helped reduce the number of calls,” he says.

The service had faced a similar situation following the tragic collapse of a balcony holding several Irish students in Berkeley, California, in the same year. Thousands of people were looking for news of their children and their friends. That crisis was an intense period due to the number of JI students in California at the time. At one stage, calls were coming in every four seconds. Telephones were manned in Dublin, Washington and San Francisco to handle the volume.

We got to the ends of the lists and knew we had matched up everyone, though people were killed and badly injured

Despite the tragic outcome, the department was able to mitigate the impact for some people, by sharing information and reassuring some families, and offering support to those directly affected. “We got to the ends of the lists and knew we had matched up everyone, though people were killed and badly injured,” says Bourne.

Consular services are also available in international situations where Irish people are in danger. In Libya during the Arab Spring of 2011, for example, they worked with the Irish Defence Forces to evacuate citizens by boat to Malta. Consular services have their own equipment, safety clothing and satellite phones and can write a passport on a heaving ship if necessary to get someone out of danger.

Medical care and repatriation of people following health issues or accidents is one of the most common problem-scenarios citizens face abroad. Costs can run into hundreds of thousands of euro. People have been known to have to remortgage homes, to rely on charities and to embark on fund-raising to get loved ones home.

The highest costs have been in China, Australia and the United States. Deaths abroad can be very expensive, and citizens frequently call on consular services for advice.

There are about 4,500 marriages abroad annually, mostly in Italy, France and Spain. Considerable documentation may be needed to get married abroad, and it may have to be translated. For a fee, consular services assist with this process.

The service assists people born abroad in applying for Irish citizenship. Consular services maintains the Register of Foreign Births. Children born to Irish citizens abroad can be registered to become Irish citizens, at a cost of €270.

There has been a significant number of requests from Britain since Brexit, with 23,000 applications in the past year, up from about 8,000 annually. Extra staff have been taken on in Dublin and in the London Embassy to cope with the increase.

The department receives about 120,000 queries – major and minor – each year about consular matters from people seeking information, advice or assistance. The vast majority can be dealt with on the spot by local missions or the team in Dublin.

This year there will be about 3,000 cases requiring action abroad, arising from illness, deaths, mental health (these issues are on the rise), crimes and missing people. Consular services will provide practical assistance and family liaison where necessary.

The consular services would like to see people better organised for travelling, using the Travelwise app for country information and most importantly having comprehensive travel insurance.

Share your story: Have you experienced difficulty abroad? Did you receive consular assistance, or help from another organisation, group, or individual in your time of need? Irish Times Abroad would like to hear your story. Email abroad@irishtimes.com (500 words max) and tell us about it. A selection may be published online.

Shame-free sex education: It’s So Amazing! And only a little bit mortifying
8