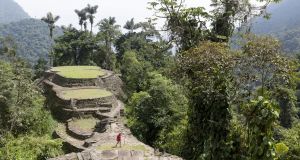 The Lost City consists of a series of 169 terraces carved into the mountainside, a net of tiled roads and several small circular plazas. The entrance can be accessed only by a climb up some 1,200 stone steps through dense jungle. Photograph: Thierry Tronnel/Corbis via Getty Images

My fellow trekkers and I stand side by side looking out from our lodgings to a glorious night-time jungle scene. The dense scrub lights up like a Christmas tree with the glowing bodies of dancing fireflies. I am awed by Mother Nature’s light show, while a young indigenous girl is equally enamoured by another set of lights. She stands transfixed, looking at the screen of a trekker’s smart phone. The digital age has reached the jungle. Two worlds collide, but perhaps we each want more of what the other has.

I am on a four-day hike through the Colombian jungle mountains of the Sierra Nevada de Santa Marta en route to The Lost City (or Ciudad Perdida) of Teyuna. It’s a 46km-round trip which might not sound bad but when you add in near-vertical climbs, wading knee-deep through mud, and battling with pesky mosquitoes, it makes for a challenging four days.

The Sierra Nevada de Santa Marta is the highest coastal mountain region in the world and home to the Wiwa and Kogi indigenous tribes. It’s been dubbed the Colombian Machu Picchu, but trumps it in many ways. Built around AD700-800, it is more than six centuries older than its Peruvian counterpart. Thankfully there aren’t thousands of tourists bused into the site each day, leaving it exclusively to a relatively small number of hardy hikers who undertake the journey.

The Lost City was once home to over 2,000 people, mostly farmers and potters who carved terraces into the hillsides at 5,700m. Once the Spanish conquistadores arrived in the late 16th century, the site was abandoned and was lost under dense jungle scrub for five centuries. Looters hunting for tropical bird feathers rediscovered the deserted metropolis in the mid-70s and got more than they bargained for. They found tombs of the dead complete with precious belongings such as gold jewellery.

For years the area was dominated by narco-traffickers and rebel armies making it very risky to visit. In 2003 a group of eight tourists and their guide were kidnapped and the site was shut down. It was reopened in 2005 and official tours and archaeological work began. Today, the Colombian military have a strong presence in the area, and the intimidating sight of their machine guns is at odds with the fresh smiling faces of the soldiers who are holding them.

We set out after lunch from the village of El Mamey, a two-hour drive from the city of Santa Marta. Our group is made up of 11 tourists, an indigenous guide of the Kogi tribe named Able, as well as Herbert, his Colombia translator. Able is dressed in a white smock, a Stetson hat and Wellington boots. He has long black hair and an expressionless face.

After 10 minutes we start a relentless steep climb which is made more difficult with the stifling mid-day sun. This 40-minute slog is a good indication of the consistent up and downhill gradients we will face over the next four days. It isn’t long until the intense heat is replaced by a torrential downpour and my sweat-drenched skin is soaked with rain.

There is no portering service so I carry all my own belongings. I had packed to a minimal with just two sets of clothes – a wet set and a dry set. It is the wet season which means the mornings are hot and humid followed by relentless rain in the afternoons. The rain makes the hike more difficult turning the red-clay paths to sloppy shin-deep mud and streams. The slippy squishy surface is hard to navigate and it often gives way, causing me to slip into the muck. I wonder how Able keeps his whites so clean.

That evening we arrive around 5pm to our first camp. The accommodation is basic and consists of rows of bunkbeds under a corrugated iron roof.

Everything smells of wet dog and it isn’t long before that smell becomes my new scent. There are showers, but I tend to opt for nature’s own and wash the layers of muck off in the crystal-clear Buritaca River or one of the many natural pools.

On the first evening we climb barefoot over slippy rocks and tree roots before arriving at a pounding waterfall and a stunning water pool. Giant blue butterflies flap overhead and it looks like the location from the dreamy Timotei shampoo ads of the ’80s.

The food is tasty and high in carbs with massive portions. Our drinking water comes from the river and is treated before consumption. Unfortunately, a number of our group, including myself, have upset tummies during the hike.

After dinner on the first night Able conducts a small ceremony to protect us on our journey through the jungle. One by one we sit in front of him while he blesses us and ties a white cotton bracelet to our wrists. I begin to realise that his face isn’t expressionless but holds the expression of serenity, something I am not accustomed to seeing.

The next morning our wake-up call is at the ungodly hour of 4.45am. Bleary eyed I shudder while peeling on my damp gear. Breakfast, by way of Arepas (Colombian corn pancakes) and coffee, soon gets me in the mood to walk.

An uphill slog marks the start of eight hours of intense hiking. We pass clusters of circular huts with thatched roofs where the indigenous communities live. By this point I am used to seeing the local people scurry by us on the trek; avoiding eye contact with a hit of impassivity on their faces. Just like Able they are dressed in white smocks. Many of the women’s hands are busy weaving and the men all hold a poporo which is a gourd they use in a coca ritual.

The poporo holds a powered lime paste made from seashells which the men ladle into their mouth with coca-leaves. They chew it all day long like a pipe smoker would puff on his pipe. It’s a mild stimulant and used to suppress hunger and boost energy. Able tells us he got his first poporo when he was a teenager, a ritual which marks a boy’s passage into manhood. His poporo has a thick collar of hardened paste around its edge from years of repeatedly wiping the ladle off it. He says the shaman in his village can interpret the markings on his poporo to help guide him in his life.

These indigenous groups live in harmony with their environment and the surrounding landscape is largely wild. Land crabs side step over our walking track and the red heliconia flowers contrast with the dominate lush green colour of the vegetation. Hummingbirds flit from tree to tree and this jungle truly feels like a lost paradise. This is all juxtaposed to the straight-lined monoculture of banana plantations which dominate much of the Santa Marta coastline.

This hike is a good old-fashioned adventure; getting mucky and climbing rocks and waterfalls on all fours. The river crossings feel like a scene from an Indiana Jones movie. On the morning of the third day we cross one river on a ramshackle, man-powered cable car. And just before we hike the final assent to the ruins, we wade chest deep in a rushing river; one hand holding our bags over head and the other hand clinging to a rope to stop us being swept away by the strong currents.

Pumped with adrenaline we face 1,200 stone steps to the Lost City. Oval-shaped terraces mark the lower end of the site and after a short explanation by Able I hike up more steps before emerging to a clearing at the top. From here I have an uninterrupted view over the jungle canopy, to the horizon and over the curving terraces of the site itself. It is breathtaking. Yet again I am wowed by nature and, close by, a young indigenous girl plays a game on one of the soldier’s phones. Technology has found this lost city and it won’t be long until hordes of tourists do too.

Deirdre Mullins was a guest of Expotur. A four-day hike to The Lost City costs €258. This includes transport from Santa Marta, all food and drinks, dormitory-style accommodation and a guide. To book visit expotur-eco.com

The above does not include international flights.

Iberia fly from Dublin to Bogota and Viva Colombia fly from Bogota to Santa Marta.

The restaurants that will not reopen in 2020

The restaurants that will not reopen in 2020
2